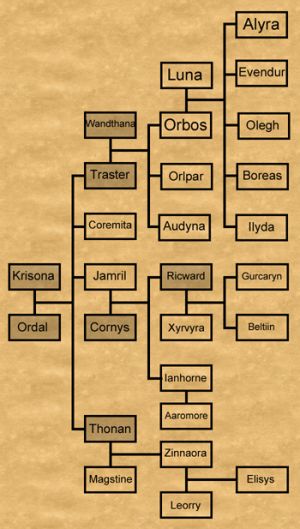 A House of land-owners and mercenary company owners, the Husteems have a reputation as belligerent and forceful. It is generally agreed that they found their way into Waterdhavian nobility solely through the depth of their pockets and the military power they wield - it certainly isn't through any inherent nobility on their part.

The family in modern nights is capably led by the politically astute Lord Orbos. Though Lord Orbos plays down the military nature of his House, it doesn't change the fact that there are plenty of mercenary captains who depend on the Husteem for their paychests.

A House of land-owners and mercenary company owners, the Husteems have a reputation for belligerence and force.

House Husteem is a House of mercenary masters and slum lords. While this sometimes causes other Waterdhavians to hold them in some contempt or fear, the Husteems also know that there's precious little that might be done to further sully their name. Their history is peppered with violent reprisals against their foes, so most go out of their way to avoid drawing their notice.

The Husteem goals are simple: to accrue power and wealth, the same as any Waterdhavian House. They are simply willing to sully their hands (and reputations, to some extent) in order to do so. Likewise, their philosophy is straight-forward: those with the strength to seize what they want practically have an obligation to do so.

House Husteem is involved in military endeavors, and in managing properties in low-income areas. Individual members are often involved in various shady undertakings as well, which the House as a whole isn't always privy to, even when those activities are funded by and profit the House coffers.

Quests undertaken by agents of House Husteem might include the following:

Scions and agents of House Husteem in good standing might receive the following benefits: 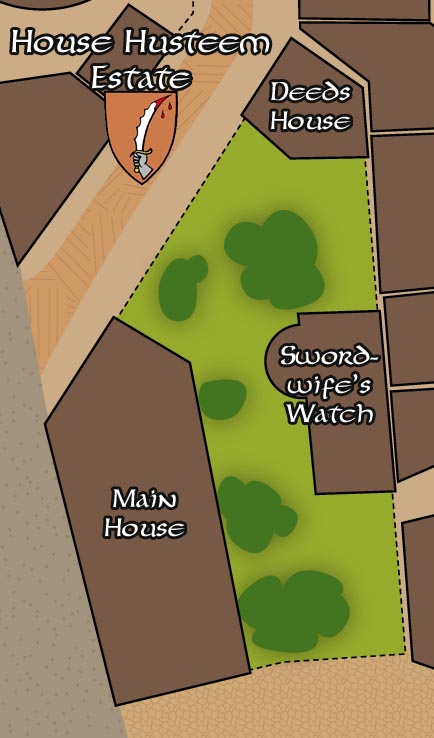 Central Street of the Singing Dolphin, Sea Ward, Waterdeep
The estate compound owned by House Husteem in the Sea Ward consists of three tall buildings with exteriors crafted of rough fieldstone cunningly fit together, and interiors of fine marble, black woods and sword-quality, polished steel fixtures. The three buildings are the Main House, the Swordwife's Watch and Deeds House.

House Husteem also owns quite a bit of land outside of Waterdeep proper. These include Silverblade Estate, a fine parcel of land with a fortified manorhouse on the edge of the Kryptgarden Forest that House Husteem sometimes uses as a hunting lodge and vacation spot. It is a Husteem family tradition to host a large hunting get-away, inviting other nobles of Waterdeep for time in the country hunting and feasting on the second tenday of Marpenoth.

They also maintain several large farms around the Goldenfields, Triboar, Red Larch and down into Daggerdale, as well as owning a few shops and other buildings in those small towns. The House has begun to look into properties in Secomber and Loudwater as well.

House Husteem has made the following public plans for the Society Season of 1353 DR: