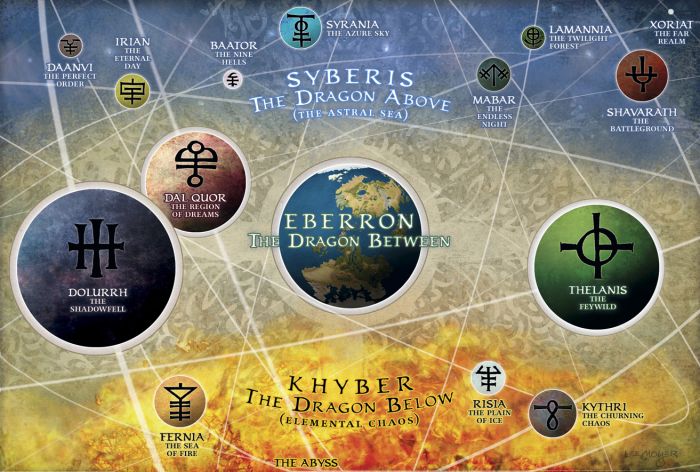 Daanvi is a plane of dispassionate order and strict adherence to the law, where justice is administered without regard for circumstance. Perfect, orderly fields and well-stocked garrisons dot the landscape of this plane. Despite the well-ordered nature of this plane, Daanvi is not a utopia, for law can be used as a tool for both peace and oppression.

Common residents of this plane include the sentient ant-like race of formians, as well as celestials such as visilights and angels. The plane is also home to countless constructs, such as inevitables (tasked with enforcing the laws of the universe) and modrons (who are imbued with the essence of Order itself).

Some scholars suggest that when Daanvi is coterminous with the Material Plane, it can be correlated with periods of stability on Eberron itself, though this has never been proven.

Shavarath embodies conflict. It is a place where angels of valor, righteousness, and lost causes war endlessly with fiends of tyranny, oppression, and simple mindless rage. Across its vast battlefields, endless sieges, guerilla skirmishes, and horrific trenches, war in all of its aspects is reflected. The denizens of Shavarath care little for other planes, as they believe the fate of all worlds is decided on the bloody plains of their Battleground.

When Shavarath is coterminous with Eberron, the world finds itself bent toward war. During battles, strange phenomena have been reported, such as whirlwinds of razors appearing out of nowhere, or creatures of Shavarath in the midst of battle spilling into Eberron.