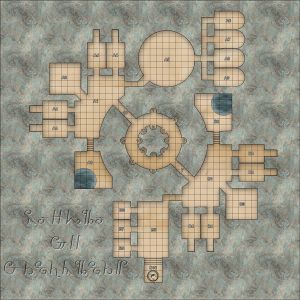 The Refuge is a hide-away in the heart of Mount Waterdeep. It has many layered magics, and the only way to access it is through one of the invisible gates scattered around the city, activated simply by walking through the appropriate archway in the Refuge, or by touching the appropriate keystone in the city and whispering the name of the Magister who created them: Maldiglas.

Maldiglas, the Magister who created this refuge, layered the very stones of the structure with potent magics that regenerate themselves, drawing naturally upon the Weave to do so. Though they may be dispelled individually in any given manifestation, they will always renew themselves as long as the structure continues to exist. The magics innate to the refuge are:

This chamber is a round section at the center of the Refuge which holds the portal arches. Each such arch has a shimmering portal in it that can be peered out of to see the location that portal leads to.

Each of these is a bedchamber with a bed, table, chair, and shelves lining the walls. One corner has a privy nook with a privacy screen, and a water basin built into the wall.

The Keystones of Waterdeep 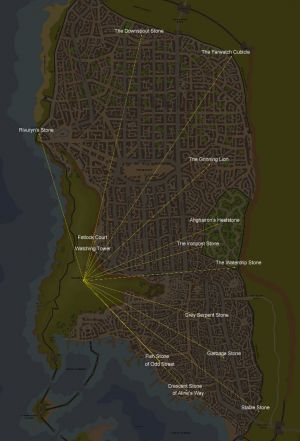 These keystones are activated by touch and the use of the name of the Magister who created them: Maldiglas. They seem to be normal stones, even to the use of magics such as detect magic, unless the viewer is less than ten feet away from them. There are two keystones in each of the Wards, plus another two in the City of the Dead. The numbers in parentheses indicate which portal the location leads to in the Portals Round.

Keystones marked in red are not currently functioning, waiting for the Refuge's magics to return them to function.

City of the Dead