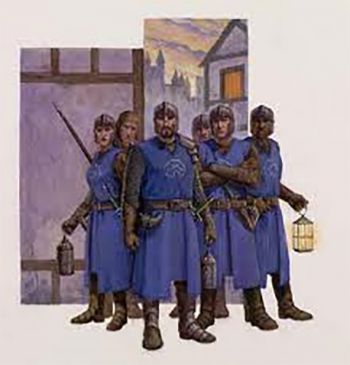 Waterdeep has both a standing army (the City Guard) and a police force (the City Watch). Though they often work together, the average Waterdhavian or visitor to the city will most often come into contact with watch street patrols, and see the Guard only at city gates, manning the walls or boarding ships for harbor inspections, and overhead on griffonback.

Down the years, watch patrols have exhibited a variety of ranks, uniforms, and strengths, because the watch experiments continually with tactics, equipment, and ways of achieving two impossibly conflicting aims: to sometimes catch miscreants by surprising them with persons they don't identify as watch officers; and to usually reassure citizens and enable them to cry for ready aid by allowing them to readily identify watch officers from afar, on sight, due to distinctive uniforms (and at night, distinctive lanterns and the like).

Patrols pass along main streets once between bells, and vary their routes often. Dockside, "red-light," and known frequent-theft areas receive around five patrols per bell, as do known "bad" taverns and inns. Temples are policed lightly, because clergy are assumed to police their own grounds and buildings. (The term "hour" is unknown in the Realms, but temple bells strike more or less in unison, an hour apart.) Watch patrols are on foot but can call horsedrawn watch prison carts to carry off prisoners or confiscated goods.

All watch patrols are armed and carry more than one "watch horn." These nonmagical signal horns are used to blow various -- and slightly altered, from time to time -- patterns of calls, to do one of the following:

To outsiders, "watchmen" (a term that some use for both genders, sometimes with "lady" added to the front if referring to a female watchman) come in three sorts: "patrolman" (male) or "patroljan" (female), "captain" (any officer controlling a patrol) and "commander" (any officer of higher rank). Many folk call every watch member "officer," just to be safe.

Ranks of the Watch 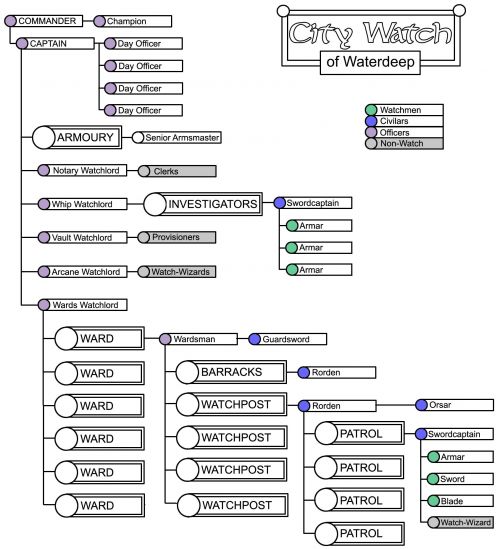 Watch members actually hold the following ranks. There are several "groups" of rankings: Watchmen are the rank-and-file, Civilars are field leadership, and Officers are administrative leadership, coordinating the efforts of the Watch on a larger scale. The Ranks here are part of membership in the Lords' Alliance Faction.

Swordcaptains and higher always wear uniforms or (rarely) armor with uniform tabards, and any watch member may wear helms, gauntlets, and leather armor if they (or a superior officer) deems it necessary. A watch member doesn't have the right to order an inferior watch member not to wear armor.

Rank badges take the form of tabards; thanks to widespread counterfeiting, pins are no longer used except on ceremonial occasions. By rank, these badges are as follows (all are encircled by an oval line sculpted into a rolling wave at the bottom and the peak of Mount Waterdeep at the top):

Members of the watch enjoy a wide but legally undefined immunity from most Waterdhavian laws while exercising their duties. They can appeal any sentence uttered against them by any Black Robe (magistrate) to the Lords of Waterdeep, which in practice means Piergeiron -- who has been very lenient with watch members of long service and good character.

On the other hand, watch members hate "bad" watch members and will hound a suspected bad apple until they flee the city, agree to all investigations, or clearly establish their innocence. Watch members found guilty of crimes or misbehavior are often fined by the watch as well as punished under law. Conversely, distinguished service often earns handsome retirement bonuses from the Lords (sometimes even outlying land or in-city buildings).

Most Waterdhavians grumble at the watch, but obey them, because the watch is seen as fair (if often thick-headed) and helpful as well as jack-booted. (They'll unhesitatingly search for missing children, safeguard broken-open shops or scared persons, and so on.)

Persons arrested by the watch are often taken to holding cells in the city wall towers, but the main lockup is a level of ironbar cells in the "dungeons" of Castle Waterdeep, with dangerous prisoners being handed over to the Guard for imprisonment in caverns inside Mount Waterdeep.

Watch members inevitably become experts in particular neighborhoods, but in the last two decades the watch has made an effort to rotate patrol duties, mixing "area veterans" with watch members from other parts of the city, so every watch officer at least knows the street layout (and places of treacherous footing, poor visibility, or particular ambush danger) of the entire city.

Policing the sewers is now the duty of the City Guard, and the watch rarely enter them except when pursuing suspects or discovering sewer tunnels that connect with building cellars.

Every veteran watch member knows at least the heads and heirs of all Waterdhavian noble families by sight, plus the persistent troublemakers among the nobility. Many know most of the guildmaster's faces, too.

Watch members customarily address male citizens as "goodsirs," except for persons they know to be Waterdhavian nobility, whom they call "gentlesirs." Mixed-gender groups of folk that include known nobles are called "gentles," and if the watch members don't recognize any nobles in the mob, they'll use the word "citizens" (even if they know many of them to be visitors).

Non-noble women are "goodwives" unless young, whereupon they become "goodlasses." Young males are usually called "jacks" or "my jacks" (as in: "What befalls? Hold and deliver truth, my jacks!")

When watch members address officers of superior rank, the word "sir" is the all-purpose formal address. "Sorn" is an added term of respect, somewhere between "trusted" and "worthy" in meaning, and is applied thus: "Sorn sir."

"Sorn" is also used in the other direction (by higher ranks addressing lower), but instead of "sir," it's added (or not added, if the speaker is grumpy or disapproving or merely bored) to the word "trusty."

In most daily situations (such as in barracks or on the streets, not in front of a Lord or Palace official or at a nobles' revel), watch officers tend to ignore rank formalities when their ranks are similar.

A watch patrol leader would think something was wrong, or she was being mocked, if members of her own patrol started calling her "sir" or "sorn sir," and so would a senior commander, if officers one rank lower than him did the same thing. This is due in part to the practice, now almost universal in the watch, of carefully being very formal and polite when you think your superior is making a mistake, or breaking the rules, or just being an ox-haunch (behaving like a jackass): in other words, clearly indicating your disapproval by tone and excessive formality without actually saying a single word of disagreement.

The watch places far more importance on diligent behavior while on duty (and springing to the aid of, or showing thoughtfulness toward, one's fellow watch officers) than on matters of etiquette. There's little or no discipline (beyond a sharp comment) for missing a salute or stumbling over another officer's title; the watch prides itself on being "family" (albeit a gruff, ungentle "slap-on-the-back, mock-one's-fellows" family) and not "a bunch of sniff-nosed, post-headed warriors."

Members of the City Guard salute often, usually with a raised weapon, but watch members seldom do so.

Some little-used formal and ceremonial salutes exist, but the most common watch salute performed indicates respect for someone's judgment, prowess at arms, or bravery. The saluter draws to attention, looks at the person to be honored, and while doing so, sharply raps the hilt of a sheathed weapon (usually a belt dagger) with one closed fist.

To any watch superior, a watch member salutes by tapping his temple smartly with an upraised, vertical forefinger.

The replying salute to an inferior is identical only if the superior officer desires to convey profound respect or gratitude.

Otherwise, the superior officer bends the left arm (at the elbow) up and across in front of her, turning that hand edgewise-on with fingers and thumb together ("a karate chop"), and strikes it gently, down from above, with the outside of her right hand, similarly bent but formed into a fist. (The fist "bounces" off the fingers of the other hand, after striking just once.)

A covert salute from a watch member to another officer (used in exaggerated, not-trying-to-hide form by officers not certain of the rank of the person they're saluting): Put the heel of the horizontal right hand on one's own belt, then swing fingers together in a single "tap" against the belt (as if patting one's own belly). If this is immediately followed by a move to scratch one's own left shoulder, it means: "Hi, there! I've got trouble, big trouble, and need you to stay and confer with me. Contrive to get close to me in some non-obvious manner, so we can talk."

A watch member receives 25 gp upon joining, plus a free uniform, a pair of boots, training, and (one) weapon. If dismissed without completing training, all must be returned except 12 gp.

Thereafter the watch member receives free room and board at assigned watch barracks (bunk, small beer, simple fare, bath access, weapon oil; need not be accepted, or can be taken up only on a casual "feel like it tonight" basis), plus 5 sp per day (active duty or not), plus 4 sp per patrol (normally only one patrol per day per watch person, the day normally being divided into three slightly-overlapping shifts/patrols). Officers receive the same 5 sp rate, but 5 sp, 7 sp, or 1 gp per patrol, depending on rank.

The watch member also receives one replacement uniform, a pair of boots, and an additional weapon per year; others must be paid for out of salary. (Additional weapons and gear are often issued "for free" out of armory lockups for patrol use, but must be returned or replaced.)