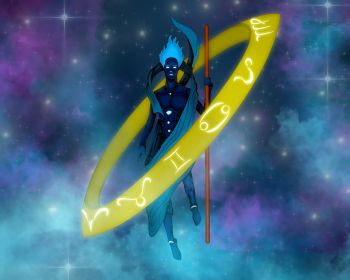 The following are the Arcana of Aion. They are most often learned as a single Array, although a sorcerer may also simply learn them as individual spells as well.

With an utterance of Aionian power, you curse a target to be abandoned by Aion's forward march, and time stutters and even stops around them, slowing or freezing them in place.

Invoking Aion, you stop the flow of time around yourself and quickly move your bodily location, allowing it start back up once you have done so. To viewers, you simply teleport from one spot to another.

By Aion's power, you rewind the body of a person or object you can see, removing damage done to them by resetting them to a previous state of existence.

This invocation of Aion's power stops time, giving you the chance to set up an attack against a target, placing it where it will drop on them, or hurling a projectile to strike them. When time restarts, the attack seems to appear out of nowhere for the target.