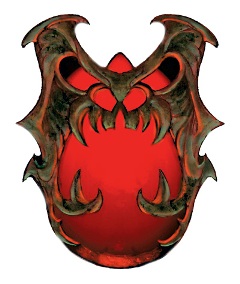 The Blood of Vol teaches that mortality is a curse, and that true divine power comes from within. The faithful, known as Seekers, believe that if other gods exist, they are cruel. Instead of worshiping a deity, Seekers seek to master the secrets of blood and life itself. This is a grim, practical faith that places high emphasis on unity, community, and making the most of one’s life in hopes of seizing the immortality the gods deny.

Life is in the blood, and thus, once a person dies, their body is simply a tool to be used. Seekers have no objection to reanimating the dead, as they’re merely objects that can be put to good use.

Some Seekers become sentient undead, such as vampires; outsiders think this means the faith worships undeath, but this is a fundamental misunderstanding. Rather, any Seeker that chooses undeath does so as a martyr, sacrificing their own divinity to preserve their knowledge and protect their communities — and thus, enabling those who still live to continue their pursuit of the Divinity Within.

The Blood of Vol is a grim faith, founded by Erandis d’Vol, an elf from Aerenal. It asserts that death is oblivion, that the universe is uncaring, and that if the Sovereigns exist, they are cruel. Its followers study the secrets of blood and life, and because they believe that death is the end, they see nothing wrong with using the bodies of the fallen to serve the living. Seekers of the Divinity Within (as the faithful call themselves) are glad to be reanimated after death; at least they can do some good.

In addition to a general revulsion toward the undead, the public opinion of the Blood of Vol is colored by the actions of the Order of the Emerald Claw. This extremist sect serves a lich known as the Queen of Death, and it employs necromantic magic in acts of terror. However, most Seekers don’t support the Emerald Claw.

The Blood of Vol has its strongest following in Karrnath and the Lhazaar Principalities. For a time, it was the national religion of Karrnath. Though fallen from favor, the faith is still practiced openly in that nation.