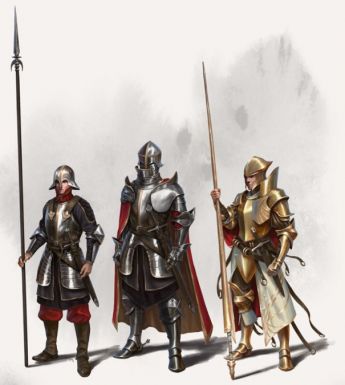 The City Guard was a highly trained military organization of fully-armored soldiers responsible for defending the great city of Waterdeep and patrolling its surroundings.

The City Guard servs many purposes related to defending the city. Within Waterdeep, the Guard protects the city walls, gates, and its important buildings, as well as providing escorts for government officials. It also patrols the harbor and the roads leading from Waterdeep to Amphail, Goldenfields, and Daggerford. It also mans the fortification at Zundbridge.

The exact size of the City Guard is a secret only known to the Lords of Waterdeep, but it was thought to be around 1,200 strong.[4] In times of war, it could enlist mercenaries and grow to a contingent of up to 12,000 members.

Waterdhavian guard uses standard titles before given names, but each rank has its own names in referring to individuals of that rank. Thus, Maeda might be addressed as Sergeant Maeda, but she is an armar. She would never be referred to as "Armar Maeda," nor referred to as "a sergeant."

A City Guard patrol usually consists of twelve members, led by a civilar, and aided by an armar. The two commanded a force of ten trusties. Some patrols may be led by two armars, one in command and the other his second.

The City Guard's duty is to investigate foreign threats to Waterdeep and to protect the city against them. Their duties include guarding the city's gates, civic sites, and citizens. City Guards can be found posted at Castle Waterdeep, Piergeron's Palace, the city walls, and its surrounding countryside. City Guard patrols also keeps watch on the roads leading from Waterdeep to Amphail, Daggerford, and Goldenfields, with patrols ranging out along those routes in half-day spans.

Around 1357 and 1358 DR, soldiers of the City Guard wore yellow scale armor under green cloaks and tabards. They wore matching conical helms of green and gold with fur trim, chainmail neck-guards, and topped by a spike. They could also carry a shield. Both tabard and shield bore the symbol of Waterdeep, a crescent moon reflected over a bay, surrounded by seven stars. They wielded longswords, daggers, and darts coated with a paralytic poison. On missions outside, they were also armed with bows.

By 1368 DR, the standard uniform of the City Guard was silver scale mail under black, gold-trimmed tabards. Standard armament included daggers, rods, shortbows, and shortswords, with the possibility of additional armament for specific assignments.Around 1372 DR, Waterdeep's City Guards wore a uniform of polished chainmail covered with a tabard in black cloth with gold trim. They carried various weapons as their posts would require, including longswords, shortbows, shortspears, shortswords, daggers and clubs.

Griffon cavalry wear a gold-tinged half-plate, and wield lance, dagger, and light crossbow. They are also equipped with magical items that allow a single use of the feather fall spell in the event of a fall, or (as is distressingly common) a mid-air leap from griffonback to attack a flying foe.