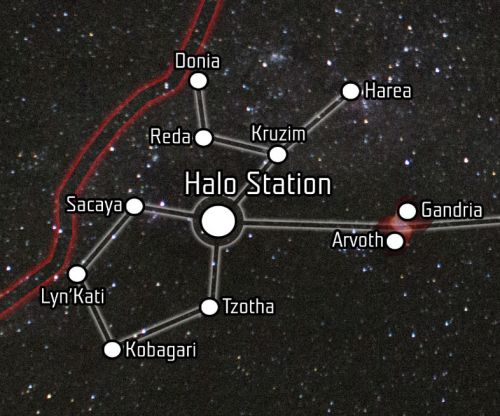 Named for the centrally-located space station Halo Station, the Frontier is a small cluster of worlds who share the dubious honor of being among the closest of worlds to the Void of Chopani, just across the sector border in the Chopani Sector. The Frontier worlds maintain a civil alliance, with a council of representatives who are explicitly denied any kind of say on an individual world's operation – here, "civility" means minding your own business.

The station was built after a series of wars among these worlds hundreds of years ago, a symbol of an alliance between those worlds. Now the station is a combination of government nexus, major trading hub, and haven for all sorts of unsavory sorts. It is also the preferred jumping off point for one of any number of explorers seeking to stake claims to new worlds they are sure exist within the Void. The discovery of the Antmuel system in the Void a generation ago sparked interest, but the discovery of Parvassis just three years ago has sparked something of a "gold rush" surge of effort – which is good for the station's economy.

Only a few of the worlds in the Halo Frontier can boast any kind of long-standing civilization. Even fewer have been around long enough to develop internal cultures and distinct societies, though there are a few.

Frontier worlds are sparsely settled, although they do have at least one settlement if not more. The tech levels on such worlds tend to be import-based: that is, whatever those colonists can get their hands on. On worlds where the settlements are sponsored by someone (a government or corporation, usually), they may have somewhat better access to goods, but many settlements that are simply collections of folk looking to make better lives for themselves tend to make do as best they can.