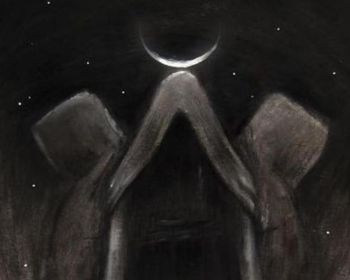 She Who Is Three, the Hooded One, Triformus
Heshem is the dark goddess of the between places, usually depicted as an ancient crone, robed and hooded, and bearing a staff or cane and a glowing lantern (often suspended at the end of her crooked staff). Cats are associated with her for their night vision and glowing eyes. Although stern and fierce, she can be a power for great good, bringing light into the darkness. Heshem is one of the Three Powers of the Modrossus.

This spell summons a golden light or an actual mystic flame whose light wards off creatures of evil and darkness.

This spell conjures a dark mist that acts as a gateway into the astral plane or dream dimension. It is traditionally cast as a crossroads, but it can actually be used anywhere.

This spell invokes powerful forces of banishment in the form of a shadowy storm of wings.

This spell cloaks an area in impenetrable darkness.

Similar to Hand of Heshem, except the shadowy extension around the caster's hand is tipped with wicked claws.