The last of the Belabranta line died in 1447, during the Wailing Years, a melancholy lonely lordling who'd seen most of his family die to the horrors of the Spellplague. Nearly twenty years later, Aulin Driios presented himself to the Lords' Court in the company of Shanree Gundwynd, his betrothed, and the Herald Falconfree. The Herald presented evidence of Uldenaer's lineage as a bastard of that last Belabranta, a byblow of the lord's dalliance with one of the House's beast-trainers, and petitioned to be granted lordship over the Belabranta title. After two days, the Lords refused his claim, but did give him rights to establish a new House, awarding him the old Belatranta title, if not the name. Uldenaer and Tareth (estranged from her family) founded House Belbrundel.

Aulin quickly ennobled his own siblings and cousins as well, and a decade of marriages to available nobles and wealthy would-be nobles followed. House Belbrundel quickly made a name for itself by providing guard drakes to those who desires them in Waterdeep. The owning of guard drakes quickly became a sign of influence and prestige, some even displaying the beasts prominently in promenades through the Heroes' Garden during the late 1470s and early 1480s.

Today House Belbrundel continues to be the sole source for guard drakes in Waterdeep, with the ritual for creating the beasts a tightly guarded secret. They are also hotly in competition with House Gundgulf for the procurement and sale of hippogriffs, though both Houses are trying to revive an aerial guard that uses hippogriffs rather than griffons. The House is known to pay top coin for the scales of chromatic dragons (only).

The House of Drakes (Villa) 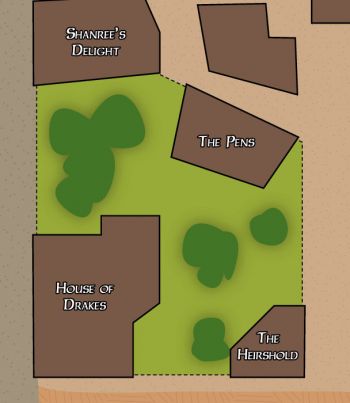 Once the villa of House Belabranta, Beldrundel's prosperity since its founding has gone almost entirely into remaking the place into an edifice glorifying the new House, and expunging the old. The great wall around the structure remains from its older days, save that the Belbrundels have added copper shields with their heraldry along its length. Between those shields are arches cut into the wall, barred with iron, that allow glances into the grounds, but also provide a vantage for the many guard drakes on those grounds to peer out at passersby. More than one citizen has lodged a protest with both the House and the magistrates at being startled by the hissing horrors, but thus far House Beldrundel's right to keep their guardians in plain sight has been upheld.

Scions and agents of House Belbrundel in good standing might receive the following benefits: