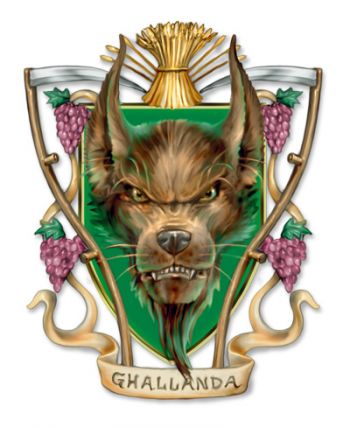 Fine food, a comfortable chair, a mug of ale, and a roaring fire: these are the treasures of House Ghallanda. The blink dog seal of the house is a beacon for the weary traveler. When stamped on the trade sign of an inn or tavern, it promises reliable service and reasonable rates - but there might be more to this simple inn than meets the eyes. House Ghallanda goes to great lengths to form bonds within local communities, and Ghallanda heirs take pride n being able to acquire special services for valued clients. The Ghallanda innkeeper is not a spy, nor does he solve crimes. He knows the word on the street, though, and if you're looking for tickets to the Sharn Opera, a discreet bordello, or a trustworthy diviner, he can help you.

Though Ghallanda is known for its inns, the house has other holdings. Ghalland landlords offer long-term housing, and the master chefs of the house prepare meals for kings and queens. The wealthy of Khorvaire vacation at Ghallanda resorts and gambling halls, while house decorators have helped to establish the aestetic of the modern age. The heirs of House Ghallanda might not be as impressive as the arcanist of House Cannith or the warriors of Deneith, but is is dangerous to underestimate the power of this house. After all, many an adventurer feels more loyalty to his bartender than his king.

The Mark of Hospitality manifested among the nomadic halflings of the Talenta Plains approximately thirty-two hundred years ago. For those accustomed to the hard life of the plains, the powers of the mark were a boon. The halflings knew nothing of the draconic Prophecy, concluding instead that the marks were a divine blessing, and that those so blessed were obliged to use this gift to help others in need. The majority of marked halflings chose to follow this call, coming together to form a new tribe. A number of ancient Talenta legends involve blink dogs helping stranded traveler, and the new tribe drew on this tradition when they adopted the name of Ghallanda, a halfling word that roughly translates as "helpful hound who appears where needed the most".

For centuries, halflings of the Ghallanda tribe roamed the Talenta Plains, offering food and shelter to the needy. They sponsored glorious feasts for the heroes of the plains, standing apart from feuds and tribal conflicts. The helpful hounds were welcome in every camp and assisted people of all tribes.

Karrn soldiers first explored the Talenta Plains when Karrn the Conqueror sought to spread his rule across all Khorvaire. The Talenta halflings were puzzled by these large and unwieldy creatures, but the Ghallanda tribe had vowed to help all who were in need. Soldiers returned with tales of little people using magical marks to conjur food and castles from the air. These tales intrigued the other dragonmarked families, and House Cannith and House Sivis organized a joint expedition that led them to discover both Ghallanda and Jorasco dragonmarked.

Despite their altruistic traditions, the elders of the Ghallanda were no fools. Even those who desired to leave the plains and explore foreign lands did not intend to do so as servants. They agreed to work with the other houses, provided those houses would help them find a foothold in their lands. After much negotiating, House Ghallanda was born.

In the Modern Age

It took some time for House Ghallanda to spread its roots. Many humans considered the halflings to be cousins to the goblins, who were largely oppressed and enslaved at the time. The Ghallanda halflings had often served as mediators in their homelands, and they used their skill and charm at every level of society as they carved out a niche in the young Five Nations. During the conflict of the War of the Mark, the Ghallanda halflings proved their worth by supplying and supporting dragonmarked forces in the field. This effort gained them the support of the other houses and secured their place among the Twelve.

Over the next thousand years, House Ghallanda spread across Khorvaire, and today is one of the most trusted houses in the land. Though some claim that House Cannith caused the Day of Mourning, or blame House Deneith for the Darguun uprising, few people have harsh words for the halflings of Ghallanda - at least as long as the ale is flowing.

The Ghallanda seal is a promise of quality, and guild inpsectors ensure that licensed and bound businesses maintain the standards of the house.

The Hostelers Guild encompasses all aspects of the hospitality industry, from food to lodging and legal gambling. In addition to those establishments owned by the house, the Hostelers Guild includes hundreds of licensed businesses, each indpendently owned. The Hostelers Guild has close ties with the Shadow Network of House Thuranni and the Entertainers and Artisans Guild of House Phiarlan, using these guilds to acquire entertainment for its business.