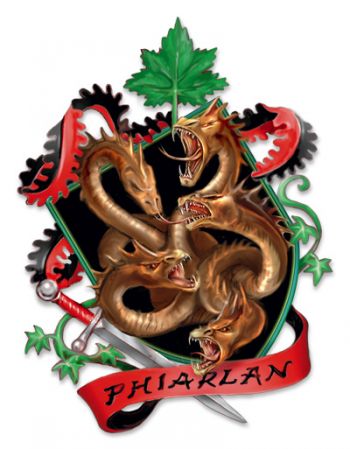 The world at large knows the elves of House Phiarlan as entertainers of the highest order. This role is not simply a cover for the secret work of the house, but a tradition that dates back tens of thousands of years. For many members of the house, it is the only trade they follow.

Though stories abound that attest the elves of Phiarlan are spies and assassins, the people of Khorvaire treat these as children's tales. Phiarlan's virtuous performers are known across the continent for their talents - who would believe that they sneak offstage and kill people during intermission? In a world that includes changelings, doppelgangers, and rakshasas, people have enough real spies to worry about.

In truth, House Phiarlan controls the finest intelligence networks in Khorvaire, but these services are available only to the guildmasters, nobles, and others the house recognizes as players in the great game of politics and power. How do the twin paths of entertainment and espionage converge? To understand the present, one must look to the past.

The roots of House Phiarlan can be traced back to the ancient conflict between the elves and the giants of Xen'drik. The elves of that lost age were not a single, monolithic culture, and in the dying days of the giants, the former slaves among them fought alongside the warriors of a dozen different unconquered elf tribes. A corps of bards and scouts traveled from front to front, carryng news and intelligence that helped coordinate the elves' attack. These couriers also struggled with the impossible task of maintaining morale and preserving the fragile alliance between the elven tribes. They called themselves phiarlans, a word meaning "spirit keeper." As the end drew near, the prophet Aeren called on the phiarlans to help him gather elves from across the continent, creating the refugee fleet that would ultimately found the nation of Aerenal.

Aerenal and the Undying Court

Before the rise of the Undying Court, Aerenal was a loose alliance of tribes and city-states. Members of the phiarlan bloodlines continued to serve as liaisons and troubadours, traveling from court to court bringing songs and news. Phiarlans worked to maintain peace and order through open mediation, but they also began to collect clandestine knowledge on their travels - knowledge that they would anonymously pass to competing tribes and leaders when doing so served the greater good. Gradually, intelligence-gathering became a secret industry for the phiarlan families, even as their skill with art, song, and dance became a shield against detection.

With the rise of the undying court, the phiarlans came into their own as spies, serving the nation of Aerenal as a whole. Their task was a noble one - bringing the light of observation to bear against the shadows of deception so that justice could be served.

The Appearance of the Mark

Some thirty-two hundred years ago, two of the first three dragonmarks appeared among the Aerenal elves. The Mark of Death was limited to the line of Vol, but the Mark of Shadow appeared within a number of elf bloodlines, all tied to the phiarlans. Though the nature of the marks was a mystery, the elves were quick to recognize their connection to the Prophecy of the dragons - the great wyrms against which Aerenal had intermittenly fought for thousands of years. Suspicion was brought to bear against the dragonmarked, and in the end, the very real schemes of the line of Vol were uncovered. The civil war that ensued saw that line and the Mark of Death destroyed, and sent waves of fearful refugees from Aerenal to Khorvaire.

This exodus included the vast majority of the phiarlans, fearful that the fury that had destroyed the Mark of Dead would be turned against them. A few remained behind and were absorbed into other lines; today, the Mark of Shadow is found among the Aereni from time to time. In Khorvaire, the majority of those elves with the Mark of Shadow set out to create a new life. To mark their departure from Aereni society they formally joined their lines into a new alliance: House Phiarlan.

The people of Khorvaire had never seen anything to compare to the artistic skills and talents of the exiled elves, and a renaissance in culture quickly spread across the land. Elf entertainers were welcome in every village and city, allowing Phiarlan's knowledge and contacts to grow. In time, the leaders of the house parlayed Phiarlan's reputation into secret contacts with the nobility, and tey began to sell the intelligence-gathering skills they had honed over thousands of years while serving as the eyes of the Undying Court.

Today, House Phiarlan lives in two worlds. Its performers can be found on the greatest stages and in the humblest taverns, and its eyes watch Khorvaire even where no elf is ever seen. Few people realize the true reach of the house, but kings and queens respect its power.

In 972 YK, House Phiarlan was torn asunder by a confliect that had festered within its ranks for centuries. In the end, the Shadow Schism saw the creation of House Thuranni and the loss of more of House Phiarlan's holdings in Karrnath and the Lhazaar Principalities.

With hundreds of years to devote to their particular arts, the elf entertainers of Phiarland are legendary. While the elves are the primary ambassadors of the arts, members of other races can study under Phiarlan as long as they have at least 5 ranks in two or more of a guild's associated skills.

While it is a simple matter do deal with the Entertainers and Artistans Guild, the Serpentine Table does not advertise its presence. A character seeking to employ the shadowy services of the house can inquire at a main enclave. If the request is worthwhile, it is passed to the Serpentine Table. When the time is right, the agent will appraoch the prospective client to discuss the job at hand.

The five artistic demesnes, along with the hidden citadel of the Serpentine Table, are the most important centers of house activity. House Phiarlan has outposts across Breland, Aundair, and Throne. Where it does not have an eclave, it often maintains a presence at the local Gold Dragon Inn, sharing costs and resources with House Ghallanda. The Serpentine Table also maintains hidden safe houses in the cities across Khorvaire.

Since the Shadow Schism, House Phiarlan has been forced to leave Karrnath and the northeast in the hands of House Thuranni. To make up for the loss of territory, it has been working to explore potential markets in the Eldeen Reaches, Valenar, and Darguun, with somewhat limited success.