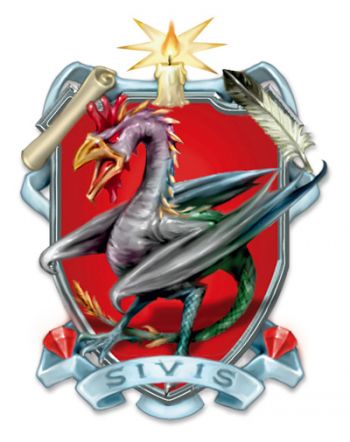 People often underestimate the value of a carefully chosen word, but not the gnomes of House Sivis. Language drives the wealth and power of this house, and Sivis has changed the shape of communication in the modern age. It is the arcane mark of a Sivis scribe that proves the worth of a Kundarak letter of credit, and the speaking stones of House Sivis that allow an Aundairian sage to contact his brother in Q'barra. Whether serving as translators, mediators, or conduits for long-distance communication, heirs of House Sivis build bridges between people, nations, and cultures. House Sivis has long served as a stabalizing force among the dragonmarked houses, and has maintained its reputation or absolute neutrality for nearly three thousand years.

The society of Zilargo has long revolved around houses: alliances of families wielding great social power. Sivis was an etablished house even before the Mark of Scribing appeared among members. Though the mark originally manifested in only a few of the bloodlines within the house, it has since spready to all the Sivis families. The gnomes are a race touched by magic and driven by curiosity, and the bards and sages of Sivis worked quickly to unlock the mark's full potential. Recognizing the risk of being ostracized for the power they held, the Sivis dragonmarked also sought to make themselves useful to Zil society, even as they distanced themselfs from the politics of those they served. In this, they laid the foundation for what would become the standard for the dragonmarked houses: mercantile forces whose neutrality increased their commericial power.

Within a few centuries, House Sivisi spready tho other lands, where its heirs skills as translators and linguistis proved invalable to the young nations of Khorvaire. Many Sivis gnomes claim that their house was responsbile for the refinement and spread of the Common tongue from the Old Common of the earliest Sarlonan migrants.

As House Sivis spread beyond Zilargo, it made contact with the leaders of the newly created dragonmarked houses, helping to establish the common traditions shared by the houses to this day. As time passed, Sivis would play a critical role in discovering new dragonmarked bloodlines and helping the younger houses establish a foothold in the world. Of all the houses, Sivis has historically had the most interest in the draconic Prophecy and the role of the dragonmarked houses within it. Ever since Alder d'Cannith's assertion that twelve contemporary dragonmarks would one day be found in Eberron, the sages of Sivis searched for the missing marks.

Despite its influence, House Sivis has never sought to dominate the houses, instead working to be a friend and ally to all. Of course, the gnomes are a subtle people, and many dragonmarked wonder if the vaunted neutrality of House Sivis is not in fact a mask shrouding a far-reaching hidden agenda.

Though the sending ability of the Sivis heris has always been treasured, the house's greatest turning point was the development of the speaking stone in 783 YK. Conceived by Tasker Torralyn d'Sivis and developed by the Twelve, the speaking stone allows Sivis heirs who carry the least mark of the house to transmit messages between stones. In 789 YK, the first Sivis message stations appeared in the capital cities of the Five Nations. Since that time, they have multiplied and spread across Khorvaire.

Today, the house continues as it always has, doing its part to stabilize a world torn apart by war. Though some are quick to write off the importance of a house of scribes, Sivis is an invaluable, integral part of modern civilization.

House Sivis controls both the Speakers Guild and the Notaries Guild. The guilds' bookish reputations (and the insular nature of the house as a whole) means that many of those outside the other dragonmarked houses have little sense of where one begins and the other ends.

The oldest Sivis enclave is located in the city of Korranberg in Zilargo, and this remains the heart of the house in the present day. The region viceroys coordinate efforts from enclaves in the capital cities of every nation of Khorvaire, including Droaam and Darguun. Though Sivis enclaves are designed to facilitate interaction with people of all races, the inner heart of an enclave is constructed for Small humanoids. As such, members of larger races find it difficult to infiltrate a Sivis citadel. Secrecy is of paramount importance to members of the house, and Oversight uses abjuration magic to shield critical areas from prying (or scrying) eyes.