House Ulbrinter has always been one of Waterdeep's trading ship powers, particularly given their reputation as fine shipwrights. They also have a reputation as possessing a degree of wanderlust, a fact that has negatively impacted the House's population, with losses and broken lineages over the years. This was made very apparent with the recent death of Lord Arthagast at the hands of the Cult of the Dragon: without a declared heir, and with lines of inheritance that not even Falconfree can seem to suss out, the balance of power in House Ulbrinter remains in the hands of Arthagast's widow, the sun elf Remallia Haventree. 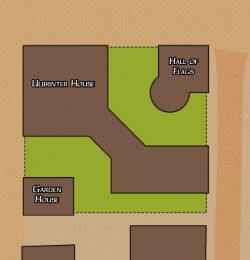 The wall around Ulbrinter House is a simple structure: eight-foot tall sections of mortared fieldstone alternating with wrought iron bars allow passerby a glimpse of the cultivate gardens and splendid architecture that makes up the noble compound.

Scions and agents of House Ulbrinter in good standing might receive the following benefits: