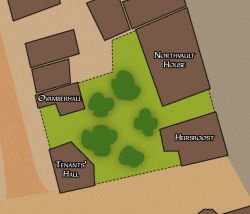 Even those who know that the Urmbrusks are landowners and moneylenders can't help but gawk the first time they see Northvault. Its wall is a six foot tall marble structure, with another four feet of wrought iron bars that end in speartips along the top edge. It is made up of four buildings, all of which are also marble, several of which feature elaborate statuary (some of it actually gilded in gold and mithril). The house seal on the double front doors of the Northvault itself are solid silver, with gemstone accents; would-be thieves are cautioned that the footmen standing there are not to guard it, but to instead warn passersby that touching it may trigger magical safeguards. 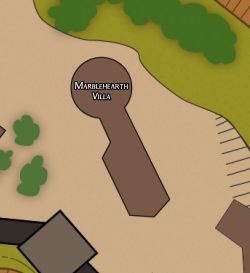 The Marblehearth is a rental villa on the Cliffride, one of the few of its kind left there (the others were long ago contributed to the founding of New Olamn). Marblehearth is three-stories in height plus an extensive cellars, with extensive marble used in its construction (the marble was that left over from the construction of the Northvault, in fact). Today, given its close proximity to the bardic college, Marblehearth is rented by a small group of its professors, who prefer living nearby to New Olamn in a degree of comfort and opulence.