Waterdeep has a strong tradition of magery. Waterdhavians inclined to worhsip one of the "arcane" faiths have traditionally favored the Lady of Mysteries dating back to the establishment of the House of Wonder in the Year of Starlight (1215 DR).

In Waterdeep, the Church of Mystra has long played a secondary role to the Watchful Order of Magists & Protectors because the sale of spells and magic items is traditionally in the province of the guild, not the church. Waterdeep's Mystran church is closely allied with the Church of Selune, and the two faiths work together to battle the followers of Shar.

With the death of Mystra and destruction of the Weave, the House of Wonder suffered incredible damage, and in the height of the Spellplague was quarantined from the rest of the city, as the ravening arcane energies twisted and warped anyone who entered its demesnes. Once that faded, the House of Wonders stood empty, for without Mystra, there was no priesthood. The Watchful Order eventually took over the compound, moving their school for wizardry into its ancient halls.

Then, with the Sundering, things changed. A tenday after every magician in Faerûn received the knowledge of Mystra's rebirth and the reconstruction of the Weave, two strangers came to the gates of the city: a man who identified himself only as the Magister of Mystra, and a silver-haired woman who bore a surname so familiar to Waterdhavians: Arunsun. Sendra rapidly began to reform the priesthood of Mystra, using old texts and new revelations from the Lady of Mystery, and over the course of the next year, the Magister returned several times, each time in the company of a newly Called cleric of Mystra.

In the intervening three years, the temple has restored the worship of the Lady of Mysteries rapidly. There are a few young clerics on hand, learning her lore and (for those with the inclination) pursuing ordination to the Mystran faith. Several of them have struck out on their own during that time as well. The first of the new clerics, Candos Restlar, remains as the Master of Acolytes.

The House of Wonder qualifies as a Mystran sanctified site, allowing her ordained clergy (Rank 3+) to cast spells with the maximum possible damage or other trait that is normally randomized by a dice roll.

There are three Factions at work within the House of Wonder: the Temple Hierarchy, the Academy Hierarchy, and that of the Knights of the Mystic Fire.

This Faction ranking system applies to those who are ordained in Mystra's service. (Note that references to Mystra below apply to Azuth as well, and the Azuthan titles are noted in parentheses.)

Knights of the Mystic Fire 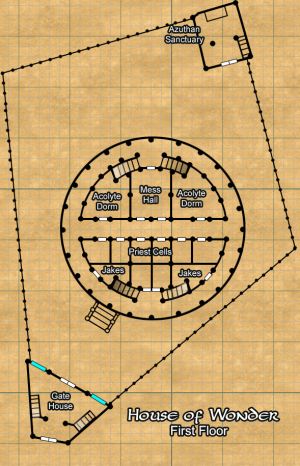 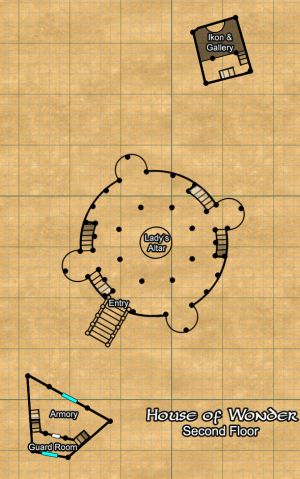 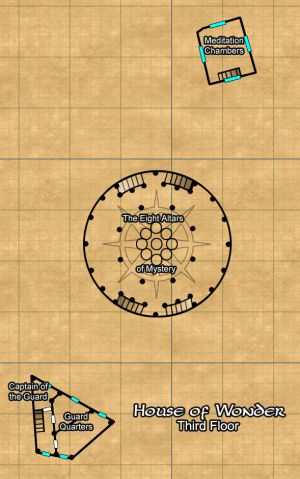 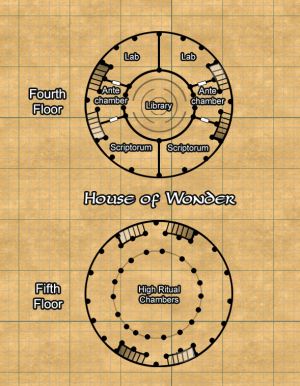 The grounds of the House of Wonder are surrounded by a fine gate of wrought iron, each spoke in the gate topped with the Eightfold Star of Mystra at the crosspoint. The grounds themselves are wrought of fine white marble cobblestones, with blue-white cobbles forming the mosaic of the Eightfold Star from which rises the temple.

Three buildings are situated on the grounds: the Gatehouse, a defensive structure maintained by the Knights of Mystic Fire, Mystra's order of paladins; the Shrine to Azuth, tucked away at the rear of the compound; and the House of Wonder itself, a great circular tower.

Headquarters for the local chapter of the Knights of Mystic Fire, the Gatehouse defends the sole entrance to the House of Wonder.

Like most temples to Mystra, the House of Wonder includes a small shrine to Azuth. The Waterdhavian shrine is home to a handful of Azuthan clergy, more than half of them mages, who tend to the needs of the faithful and stand out among the Mystran clergy by dint of their gray robes among the Mystran blue.

Set into the temple's foundation, this floor - which is wider than the others - serves as living space. Beneath it is a wide-open set of cellars, with storage space as well as a library for both apprentices and acolytes, and the teaching rooms for both temple and academy.

This is the main entry of the temple, a vast pillared circular chamber. In the center is a circular altar from which rises a flickering blue-white flame. Those who approach the altar find the flames parting, and the image of a serene, slightly aloof goddess - a depiction of Mystra - gazing at them from out of the flame, no matter which direction they approach the altar from.

Small side alcoves either provide access to the stairs up or down (and are usually watched over by an acolyte), or harbor small sitting areas with priests ready and able to discuss the needs of the faithful. The southermost alcove also holds a holy water font, where the faithful may purchase Mystran holy water from.

The Shrines of the Eightfold Star