"The ache for home lives in all of us, the safe place where we can go as we are and not be questioned."

"Home is the nicest word there is."

"Family is not an important thing. It’s everything."

"I don't know about you guys but we are the weirdest herd I've ever seen."

Burglar's Pack includes a backpack, a bag of 1,000 ball bearings, 10 feet of string, a bell, 5 candles, a crowbar, a hammer, 10 pitons, a hooded lantern, 2 flasks of oil, 5 days rations, a tinderbox, and a waterskin. The pack also has 50 feet of hempen rope strapped to the side of it.
Mess Kit is a tin box containing a cup and simple cutlery. The box clamps together, and one side can be used as a cooking pan and the other as a plate or shallow bowl. 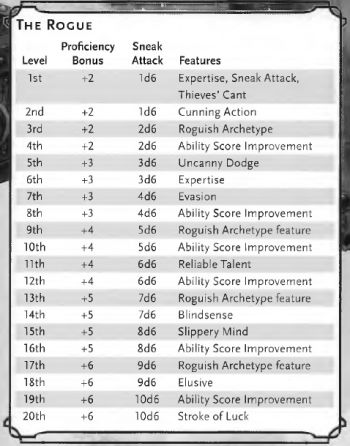 Bountiful Luck Instead of Ability Score Improvement, take a Feat. When an ally you can see within 30 feet of you rolls a 1 on the d20 for an attack roll, an ability check, or a saving throw, you can use your reaction to let the ally reroll the die. The ally must use the new roll. When you use this ability, you can’t use your Lucky racial trait before the end of your next turn.

Steady Eye At 9th level, you gain advantage on any Wisdom (Perception) or Intelligence (Investigation) check if you move no more than half your speed on the same turn.