Difference between revisions of "Promenade-in-Exile"

With the Sundering and the return of the Dark Maiden, the Sword Dancers of Ardeep received an unmistakable message: the time had come to return and reclaim the Promenade. The years since its fall had not been kind, however, and the Moonspring network of portals was long-since devastated and disrupted. Moreover, the night they arrived in Waterdeep, as they came upon the city gates, they saw an unmistakable blessing: the Dark Maiden herself, dancing along the cliffs, above the level of the walls so that many Waterdhavians saw her, and dancing above a portion of the Field Ward.

Since then, the new temple without a temple, the Promenade-in-Exile, has taken upon itself a two-fold goal: to reclaim the Promenade, yes, but also to found a temple and dancing place above ground, within the city itself. Rather than a hidden dell tucked away in the forest, they will raise a hill within the city's walls, to show that the time for drow to take their place in the Lands of Light (even if that light is only the moonlight for some).

In pursuit of this goal, they have set up what community they can, finding homes and work for the drow of their temple within the city, and endeavoring to achieve their goals to the best of their ability. Yes, they have found allies in this – the noble elf lady Remallia Haventree, a known Harper, chief among them – but the opposition is terrible and vicious as well. Homes vandalized, and those who travel alone often attacked. But the Lady Leliana Vrinn knows that there is hard work ahead of them all, and it is work she is anxious to see underway.

Today, they meet in the Shrines of Nature during the nights of the full moon to celebrate, a favor arranged for them by Lady Remallia Haventree. They gather in one anothers' homes as they are able, or in private rented rooms of an inn or festhall sometimes. It isn't ideal, but it serves for the moment. 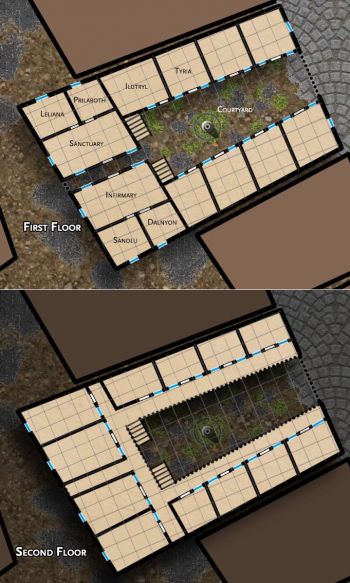 A small boarding house built around a courtyard in the South Ward, this structure is made up of a variety of old and somewhat beaten-up residences that offer cold comfort to the clergy and faithful of the Promenade-in-Exile. Worse still, the locals in the neighborhood clearly resent the sudden appearance of a "den of filthy dark elves" in their midst, to the extent that the Eilistraens have had to board up all of their outward-facing windows to protect them from being broken and things thrown through them.

At any given point in the day, there is a small gathering of locals across the street, watching the courtyard gate to the Hall. Angry muttering is the typical reaction to any of the drow showing themselves, and at night the crowd who is watching is of a rougher variety, and inclined to do more than just mutter angrily.

The boarding house is actually quite run-down and badly in need of repair.