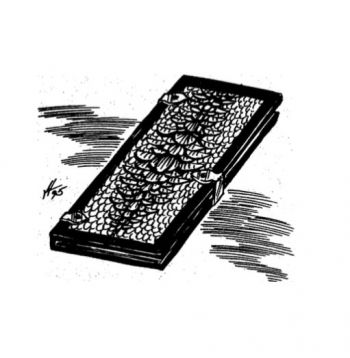 This volume is a tall, thin tome (two handwidths across by six high) of black-edged parchment pages bound be- tween thin boards of duskwood, covered with mauve-dyed pseudodragon hide. The tome has 16 pages.

Tasso is an infamous illusionist active in the Inner Sea lands of Toril. The leader of a band of thieves and adventurers, the All-Seeing Eye, Tasso robbed many a royal treasury and temple vault in Chessenta, Mulhorand, and the independent cities of the Vilhon Reach and the Near South. He became the target of many hired bounty hunters and assassins, and he survived many spectacular battles as he escaped one ambush after another. About four winters ago, Tasso vanished, either fleeing to another plane or being slain by a killer who was luckier or more persistent than the rest. An early casualty of raiding bounty-hunters, Tassos Arcanabula (spell workbook) was seized from his cave abode near Starmantle and presented to the patron of the bounty hunters, the Marcrowne of Turmish. It was soon stolen from the Marcrownes palace vaults, and its present whereabouts are unknown.

The contents of Tasso's Arcanabula are quite simple: it holds sixteen pages, each one emblazoned with a single spell. These spells are not written in the standard notation for arcane magic, which takes up multiple pages, but is writ in the same style that spell scrolls are. It is an expensive and nearly lost art in modern wizardry.