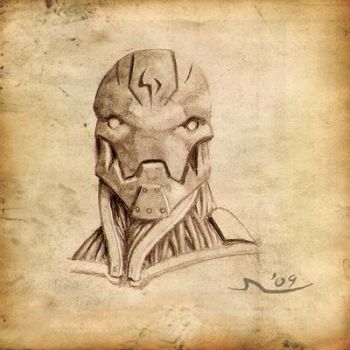 During the Last War, some warforged acted as body guards and personal attendants to captains and higher-ranking members of the various armies involved in the conflict. In Breland, warforged particularly suited to such roles were often given by their owners as gifts to superior officers. One such warforged, named Bulwark, distinguished himself so well that he was eventually gifted to King Boranel. Although few but those in the king’s inner circle know the exact reasons, it’s generally accepted knowledge that King Boranel campaigned for the freedom of warforged at Thronehold due to the influence of Bulwark.

The freedom of warforged and the destruction of the creation forges were major sticking points in the negotiations at Thronehold, with Thrane offering the most resistance. After two weeks of argument and bargaining, it was agreed that warforged should be free.

When the announcement was made, Bulwark left the king’s service. King Boranel could have ordered him to remain, not as property but as a subject of his kingdom; however, after arguing for warforged freedom for so long, he felt he could not keep Bulwark in service to him if the warforged wanted to leave. Bulwark vanished from history at this point, although the events that led to his freedom happened but two years ago. The construct largely responsible for warforged freedom left Thronehold on foot, walking east, and has not been seen since.

"We are not your slaves. We were born bowed. But we are unbroken.” - Bulwark

Even though Bulwark has not been seen or heard from for over two years, other warforged still rally around his causes and his teachings. While not a religion, per se, it has become custom for some warforged to gather together for mutual benefit and support to discuss Bulwark's known teachings and philosophy. Larger cities such as Sharn have started hosting regular meetings of the Unbroken Warforged Betterment Society where warforged will come together to learn how to be better warforged and how they can apply their freedom to society as a whole. Some have taken on Bulwark's teachings as a Path, or an Oath, and you now will find Monks, Paladins, and Clerics who find the teachings of the Unbroken as the source of their power.

Tenets of the Unbroken

Warforged are weapons. It is what they were created for. But now the warforged are free, and each of them must discover for themselves what kind of weapon they will be. Every warforged must now decide who or what they will fight for.