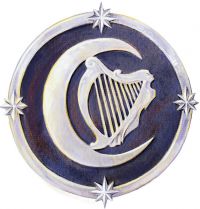 Prerequisite: Rank 4, Harper renown 50+, and nomination by another High Harper

Not all Harpers do the same tasks. Harpers tend to receive training that fits well with their best talents, aiding their fellows to the best of their respective abilities. Apprentice Harpers are in training to assume one of these roles, generally speaking; Harpers may not choose one of these Roles until they achieve Rank 2.

Spies and sneaks, rogues and shady sorts, harpshadows are well-versed in some aspect of covert operation or criminal enterprise. Harpers often operate outside of the law, and harpshadows are those who facilitate that when necessary. The criminal contacts a Harper develops are often put to the use of the faction as a whole.

Often considered the quintessential Harper, harpsingers are social butterflies, adroit and charming. They develop allies, recruit watchers, establish spy networks, and manipulate the enemy into betraying itself. Above all, the song of the Harp is a sweet one.

Harpsages are vital to Harper efforts, for they specialize in the possession of knowledge and its use and dissemination to those Harpers who may benefit from it. Harpsages are often thought of as arcane loremasters or theologans, but they are more than that: keepers of gathered intelligence, crafts-people, scholars of history and the natural world, and even those who specialize in old riddles or songs.

Not everyone who qualifies for one of these titles receives them. They are specific jobs, with responsibilities and benefits for those chosen to fulfill them.

Prerequisite: Rank 2+
Brightharps have one job: to make the Harpers shine in the tales of the people. Their job is to inspire. As such, they are most often the Harpers who are public (or as close as any Harper gets) with their Harper affiliation, and who work to build good relations between the faction and those who might be inspired to help.

Prerequisite: Rank 2+
Mentors are assigned apprentice Harpers (Rank 1) and help guide them into becoming full Harpers. Mentors train their apprentice diligently and even occasionally take them out on missions, to give them field experience under a careful eye.

Prerequisite: Rank 2+
Recruiters take responsibility for the Watcher network. They tend to be charismatic, and are skilled at selling the good the Harpers do to those in positions to deliver useful information to Those Who Harp.

Prerequisite: Rank 2+
Ultimately, the work of the Harpers is done in secret and seclusion. Someone must work to make sure that the efforts of Those Who Harp can be carried through as safely and clandestinely as possible: this person is a Harper Warden. Wardens tend to the security of not just their own cell, but that of the local operating area, usually coordinated by a Master Warden (or a High Warden, if one is local).

Harpers in the North

The following locations have a discernible Harper presence capable of providing assistance and support to Harper agents. Other places may have a few agents or Watchers, but these are places Harpers can go when they need aid or sanctuary.