A house of singular devotion to the moon goddess, House Wavesilver's sailors and navigators tend to consider themselves adventurers first and foremost. The years have been kind to the Wavesilver name and fortunes, as that boldness has let them weather some of the horrors that have nearly destroyed other Houses. Today, the Wavesilver merchant fleet is highly regarded, and the House quite prosperous. 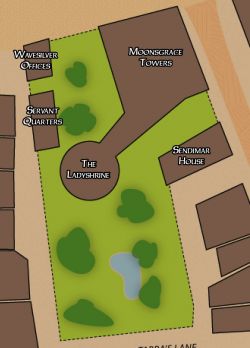 The Wavesilver villa is an old and storied estate. Unlike too many villas, it has never been given over to strangers or fallen into disrepair, and its large double doors, gleaming white with silver accents, with a strained glass window depicting Selûne dancing on the waves, the moon haloing her head, is an iconic landmark in the Sea Ward.

Scions and agents of House Wavesilver in good standing might receive the following benefits: