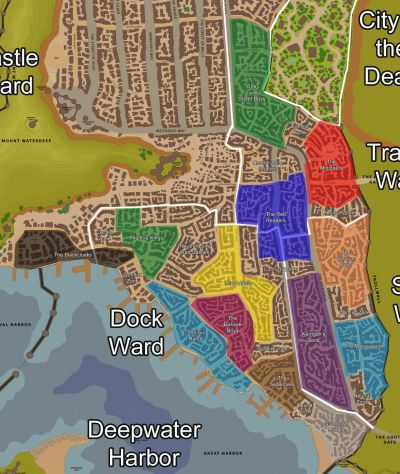 Dock Ward
A stunningly vicious and violent gang, the Adders are fond of using poison and are frequently hired as torturers. They are said to have backing of some kind from the church of Talona. They also have established a powerful allied bloc of gangs, alongside the Basilisk Boys and the Six Hands.

Dock Ward
A gang well-known for its mastery of Waterdeeps sewers, the Basilisk Boys were on the verge of being wiped out by enemies to either side. They gratefully accepted the Adders' offer of alliance a decade ago.

Dock Ward • Castle Ward
Possessing a sinister reputation, the Blackcoats are masters of violent crime, from mugging and home invasions to assassination. They are said to have ties to some dark faith - Mask or Loviatar according to some, or Bhaal according to others.

South Ward
Made up of the sons of those caravan-workers who settled in the area south of Caravan Court, the Caravan Boys are known for their smuggling and horse-thievery.

Dock Ward
So named for their original proximity to Castle Waterdeep, the Watch has successfully driven the Fire Kings back over the years. They are known to employ several alchemists, and do not hesitate to use the substances those craftsmen create for them. They deal extensively in drug processing and sales, as well as kidnapping and blackmail.

Dock Ward
A gang that formed when the mercenary company by the same name lost its official commission twenty years ago, the Blades have a reptutation as well-armed and -armored in comparison to other gangs, a likely reason why they have no current enemies. They run protection rackets and illegal gambling operations.

South Ward
A gang with its roots in adventuring, this gang sprang out of the force of minions once used by the wizard Kerrigan, in the 1240s. After Ahghairon slew the renegade (who turned out to be one of the Lords of Waterdeep), his band of thugs survived and started to make a living shaking down the folk in the neighborhood they dwelt in. Though the original "Sons" are long gone, the skills they passed on are not: Kerrigan's Sons are well-known for their skilled blade work and tactical acumen. They also seem to have superb negotiation skills, having made allies of virtually every other gang adjacent to them, and even fostering alliances between some of them.

South Ward
A gang that mostly consists of fairly dangerous thugs and leg-breakers, the Marrowsons are said to have gained their name because they're not happy in breaking the bones of their enemies "until they see the marrow."

Trades Ward
A gang originally based around the Court of the White Bull, the Minotaurs are made up of smugglers, muggers, and burglars, for the most part, although they do occasional leg-breaking as well.

Dock Ward • Sea Ward • Trades Ward
Originally based around Book Street, the Red Readers have earned their nickname by maintaining the largest number of wizards among their crew. It is also how they've managed to extend their influence so far beyond their original territory, though they've made powerful enemies in doing so.

Dock Ward
One of the oldest gangs in Waterdeep, the Seawolves have made a number of enemies in their time. They also dabble in nearly every kind of gang crime; its members occasionally dabble in piracy as well, hiring aboard pirate vessels for a few years before returning to the gang. Those who've done so form the leadership of the gang.

Dock Ward
Though their symbol is a fairly sinister-appearing circle of six hands (fingers outward), their name comes from their founders: six deckhands who eventually tired of shipboard life and took to helping themselves to the cargos along the docks. To this day, the Six Hands still run the biggest cargo-theft and smuggling operations of any of the gangs.

Trades Ward
A gang originally based around the Street of Tusks in the Trades Wards, the Tusk Street Boys do extensive sales of drugs, as well as acting as bodyguards and warehouse guards for many of the fences in Waterdeep.