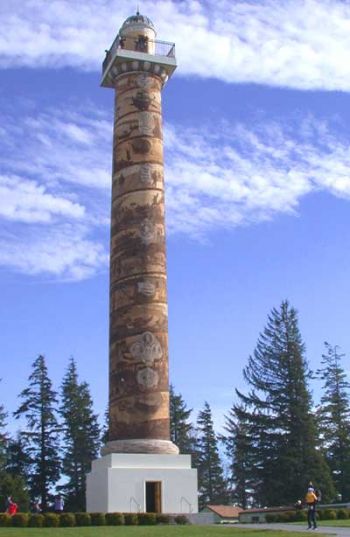 The Astoria Column is a tower overlooking the mouth of the Columbia River on Coxcomb Hill in the city of Astoria in the U.S. state of Oregon. Built in 1926, the concrete and steel structure is part of a 30-acre (12-hectare) city park. The 125-foot (38 m)-tall column has a 164-step spiral staircase ascending to an observation deck at the top and was added to the National Register of Historic Places on May 2, 1974.

The tower was built in 1926 with financing by the Great Northern Railway and Vincent Astor, the great-grandson of John Jacob Astor, in commemoration of the city's role in the family's business history. Patterned after the Trajan Column in Rome, the Column was dedicated on July 22, 1926. The first Community Antenna Television (CATV) System in the United States was built in 1949 utilizing the column. In 1974, the column was listed in the National Register of Historic Places. The murals that make up the column were refurbished in 1995 and a granite plaza was added in 2004.

The 125-foot (38 m)-tall column stands atop 600-foot (180 m)-tall Coxcomb Hill and includes an interior spiral staircase that leads to an observation deck at the top. The spiral sgrafitto frieze on the exterior of the structure is almost seven feet wide, and 525 feet (160 m) long. Painted by Electus D. Litchfield and Attilio Pusterla, the mural shows 14 significant events in the early history of Oregon with a focus on Astoria's role including Captain Gray's discovery of the Columbia River in 1792 and the Lewis & Clark Expedition.

The cast-iron spiral staircase inside the column was closed for safety reasons in November 2007. It was reopened to the public in time for the Regatta in August 2009.