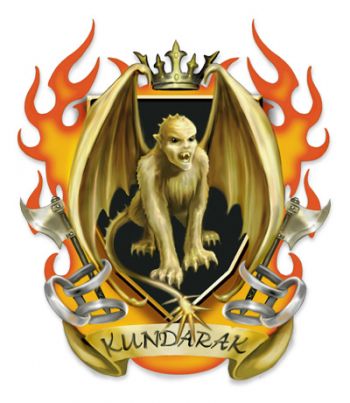 As civilization develops and expands, the need grows for security and standardization in the commerce between peoples. The dwarves of House Kundarak understand this better than anyone else. The power and wealth of this house stem not just from its influence over banking and finance, but from the safeguarding of all valuables. The rich veins of gold, iron, copper, and other minerals found in their hold in the Cogs have made the Kundarak dwarves some of the wealthiest individuals in Sharn, and the house has spent centuries parlaying that wealth into a financial empire.

Wardens of the Gates

For some seven thousand years, clan fought against clan over disputed territory, mineral rights, and especially honor. Dwarven pride is strong even today, but in an older age of blood and steel, pride was a way of life - and death.

Though the origins of the dwarf kingdoms are lost to history, it is known that a unified dwarf nation once spread deep beneath the City. Within this kingdom, it came to pass that twelve warriors were exiled for barbarism and unrest, forced to the surface along with their followers by Lord Kordran Mror. The gateways to the kingdom below were closed off by powerful magic, the dwarves told that they would remain in exile until they found the honor that their barbarism prevented them from attaining. Alongside the exiles, a clan of wardens was sent to the lands above to watch over these gates - a clan by the name of Kundarak.

For thousands of years, the exile clans fought among themselves, both for dominance and for the right to return to the kingdom of stone. Even the appearance of the Mark of Warding among the Kundarak clan did nothing to stem the conflict; indeed, it fast became a source of bitterness and distrust among the other clans, who developed no such marks. When Prince Karrn annexed the lands around the mountains for his father King Galifar, the fractious clans were easily subdued.

As it happened, the dwarves' subjugation by Galifar was their salvation. Forced to set aside their violent ways, the exiles created a common culture and found the honor they had long sought. In the end, though, this understanding came too late. When the heirs of Kundarak opened the sealed gates, the kingdom of stone was gone, destroyed by the daelkyr while the twelve clans made war on each other. However, with their ancient duty to guard the entrances to the lands below discharged, the Kundarak were free to set their sights on greater tasks.

With the aid of the gnomes of Zilargo, the Kundarak clan began its transformation into House Kundarak, and it was formally inducted into the dragonmarked houses in 106 YK. By the close of that century, few banking and fincancial operations in Sharn were not under the control or influence of the dwarves of the Mark of Warding. For eight centuries, the once barbaric stonefolk of the cogs worked patiently to establish themselves among the other surface races. When the Last War erupted, the Mror clans declared their independence from Karrnath. Though House Kundarak has never held a seat on the Iron Council, its support was central to the political will that forged the dwarf nation.

Today, House Kundarak's affluence and the power of the Mark of Warding cause the house to be held in high esteem. Its clients depend on the house seal that endorses a Kundarak leter of credit as much as they depend on the power of the arcane lock that protects what that credit can buy. Like House Sivis, House Kundarak has a vested interest in remaining (or at least appearing to remain) neutral in its dealings with the other dragonmarked houses, as well as the rulers of the Five Nations. Were this public integrity to be compromised, Khorvaire's entire financial system would suffer.

If it's worth stealing, chances are that one of House Kundarak's two guilds can help keep it safe. Through its Banking Guild, Kundarak endorses loans (typically at 10% interest per year, plus a collateral requirement) and letters of credit, in addition to providing safekeeping for some of Khorvaire's most valuable treasures. The Warding Guild boasts experts in defenses both magical and mundane.

The Golden Door is a division of the Warding Guild that designs and implements security protocols of every kind, from mundane doors and locks to the most complicated magic wards. Among the dragonmarked, House Kundarak is best known for the work of this division.

The Iron Gate is the sister sect to the Golden Door. When living bodies are necessary for safeguarding of valuable sites or objects, teh soldiers of the Iron Gate are called. The division's leaders work closely with Deneith's Defenders Guild, and often send business that way when the job turns more on protection of the living than their materal wealth. The soldiers of the Iron Gate are just as capable as Deneith's but they try not to step on their human allies' toes. However, they can and do serve dwarves who prefer the protection of their own kind.

The first and greatest House Kundarak enclave is the stronghold of Korunda Gate, nestled high in the mountains of Kundarakhold. Nearly twenty thousand dwarves make their homes here, giving the house its own standing army should it ever need one. In the event that Kundark's martial and magical prowess proves insufficient, residents of Korunda Gate can flee to the extensive vaults beneath the city, where much of the house's wealth - and that of select clients - is stored.

Korunda Gate is large enough to require not just one, but an entire council of hearthwardens. All political, legal, and executive decisions still rest with Lord Kundarak and his family, but the council administers the day-to-day operations of the city as an enclave. The head of this council is given the honorific of matron, a position presently held by Matron Jakela Tuvodni, the stern but much beloved "hearthwarden of hearthwardens."