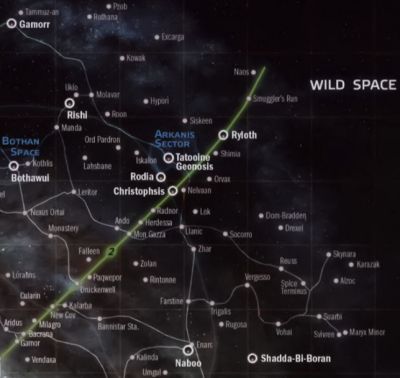 The Gateway Subsector - Notable for its proximity to Ryloth and the Corellian Run, the Gateway Subsector includes both the City-World of Durall, and the Imperial Stronghold of Tinann. The Empire maintains a strong presence here, with patrols along all major hyperspace lines and inspection at all major starports and space stations.

The Dontal Subsector Located approximately halfway between Durall than the Klet Nebula, the Dontal Subsector takes its name from the massive deep space Dontal Station. This area also includes much of the industrial infrastructure of the region.

The Klet Subsector - At the far end of the Sector, near its boarders of Wildspace, the Klet subsector is home to the expansive Stellar Nebula known as Klet. Here the most violent and dangerous individuals make their home, far away from the scrutiny of the more civilized Gateway and Dontal regions. While the Imperial Navy rarely makes a sizable presence here, the Hutt Cartel and the Crimson Corsairs both use their influence to keep the region from falling into complete chaos.