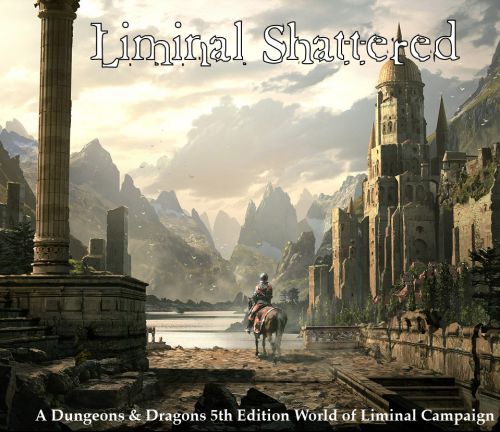 It has been fifty years since the Company of the Rose & Thorn entered the Wretched Citadel, never to return.

It has been fifty years since the Shattering of Liminal, and sundering of the planar walls that made the heart of the ancient Crossroads City into a dominion imbricate with the Far Realms. Great, terrible rifts tear through the sky and release fell horrors into the now-ruined streets of a place once teeming with culture and civilization.

Now, a half-century later, the once-great city of Liminal is a horror-haunted ruins, avoided for hundreds of miles around thanks to the twisted monstrosities that even now occasionally spill forth from one of the three blasted gates of Liminal. Thesecreatures hunt and kill without hesitation or even true motivation, drive by madness and hatred for things not of the Far Realm. Those nations unlucky enough to be close to Liminal have learned wisdom and fear when it comes to dealing with those horrors, and many adventurers venture as close as they dare into its aberration-haunted wilds.

The planar cities once connected to Liminal now fight a war to keep the Far Realms from intruding in on their dominions. The sidhe armies of the Feywild have encircled what wasonce the Greensward, fighting to keep the aberrations that have taken over the round-walled enclosure from breaking through into the rest of Arilan Atrin.

In contrast, the armies of the Raven Queen have wholly taken the Blackstreets to keep the Far Realms out of the Shadowfell, and the ifriti masters of the City of Brass have all but razed the Coalman's District with elemental fire, turning it into an inferno that will destroy anything attempting to traverse it. Angelic legionnaires have overtaken the streets of Empyros to keep the Far Realms out of the Empyrean Court, while the great devil-dragon of the Talion Court has abandoned the Hellsward to the Far Realms incursion. The planar trading city ofBasinadath has fallen in its entirety to the monstrousness of Liminal's broken quintans, and no one knows what has happened to long-lamented Gruenmar and its Warrens.

Liminal - once a shining, glorious place - has become a symbol of madness, fear and death. Those of other lands point to it as the folly of the peoples of this world mingling with the other planes, and those who do so find themselves lynched. Powerful wizards know better than to relate their travels to other planes, and the worshipers of the gods do not speak of traversing the mortal realms. Warlocks and others who truck with extraplanar powers may find themselves lynched, as do many of those who may wield the strange powers of the mind that so many have come to regard as a staple of Far Realms taint. Even the city-state of Astrapola, with its psionic knights and astrologers who looked into the firmament for power,was destroyed some thirty years ago by its fearful neighbors.

But now, something has happened - the remains of an adventuring society has scoured the lands,looking for those with ties to the old adventurers who entered the Wretched Citadel. They want to find out what happened, and how to fix it, and they need those with ties to the Company of the Rose & Thorn in order to do so.