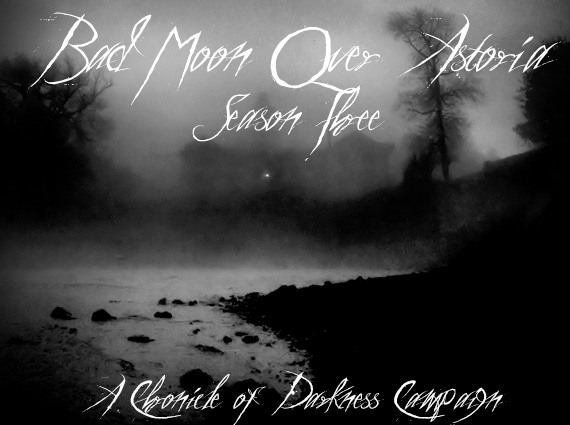 A World of Darkness Chronicle, set in Astoria, Oregon
I see the bad moon arising.
I see trouble on the way.
I see earthquakes and lightnin'.
I see those bad times today.
Don't go around tonight,
Well it's bound to take your life,
There's a bad moon on the rise.
Bad Moon Rising

Once again the Astoria Pack has an Alpha, and not a moment too soon. With the liberation of the ancient Clatsop spirit known as Talapus, the pack has aroused the ire of the strange Nordic witches that supposedly have controlled Astoria's destiny since the spirit was bound.

With Spring Break, members of the pack went many different ways: some to mundane university celebrations, others to spend time with mentors in the Cults of the Moon. And still others have disappeared entirely, though this does not become readily apparent for some time.

Now the Völur witches of Astoria stir, and they rouse to power their ancient bearsarks allies. But Talapus has taken the flesh of Victor as his body, and claims to be an ally of the Astoria Pack. Conflict seems inevitable - but who will survive it?

The University in Shadow