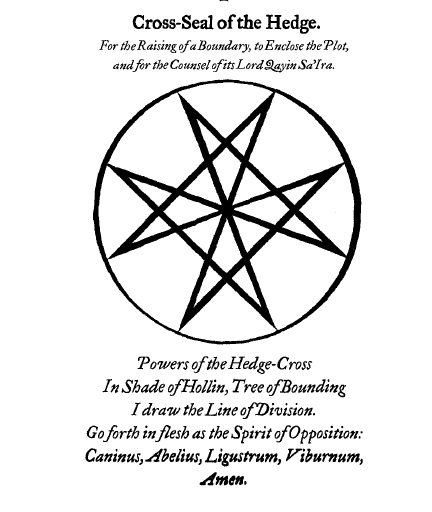 The arts of the cunningfolk are long-established on the British Isles, in particular in the folklore of Essex country and thereabouts. Strange men and women, often living at the fringes of society, they were still sought out for their occult powers: the ability to heal, to harm, to lift and place curses, to find what was lost and to prevent such loss in the first place.

The work of the pellar, or cunningman, has transformed greatly over the years. Indeed, its practitioners believe that it has died out and revived itself many times, for they believe that the true steam of cunning is found beneath the realms of men, in the place of dreams. Many men and women, touched near to madness, have found themselves at the True Sabbat, a witches' gathering in the dreaming world, where they circle 'round a tree atop a hill beneath a night-black sky awhirl with strange, unknown stars. When they wake, they return with these strange lores.

Over the years, many strains of folklore that found its way to the British Isles has been absorbed into cunning practices: Biblical apocrypha, lore about the dead, faery stories and all manner of odd folklore. For example, so-called "toad witches" who were said to gain their powers from casting the bones of a natterjack into a river and snatching up the sole bone that shrieked as it floated upstream are considered part of the cunning practices, as were those initiates of the Horseman's Word, a fraternal esoteric brotherhood that purported to gain their powers from meeting the devil at a crossroads and learning a word that allowed them to command horses.

Part of the lore comes from Biblical stories, particularly those that found their way to Britain with gypsies. In this lore, they hold Cain as the first of the witchblooded, and his teachers Lilith and the Grigori, or certain fallen angels who taught their occult secrets to mankind through the witch-father Cain. Such legends also conflate him with Tubal-Cain, who is said to have been the first human to forge metal, taught by the fallen angel Azazel.

Prerequisites: Crafts 1, Occult 2
A style of traditional witchcraft native to England and Wales, the cunning-man or cunning-woman (also called a pellar) draw on old rites. Largely Christian in origin, cunningfolk maintain a strange origin story, believing that their practices are the results of the out-cast Cain learning witchery from Lilith and the fallen Grigori.

The cunningmen have invoked and called upon a wide variety of spirits over the years.

The core patron of cunning-craft, a sinister shadowy figure, often seeming to wear a cloak and hat, who is called upon to make an initiate into an adept. He is met at a crossroads, and carries with him the chill of the grave, though those who are ready to receive his blessing also regard him with an unusual sense of excitement. His exact identity, connection to the other spirits of Cunning work or similar associations are wholly unknown.

Cain is the First Murderer, and the mark placed upon his brow is the mark of the outcast. Sent into the Land of Nod, he encountered Lilith, who taught him the ways of witchcraft, and introduced him to the Grigori. He is the First Farmer and the First Smith, and considered the patron of witches who craft things with their hands.

Lilith was the First Woman, and made out-cast for her refusal to be subordinate to Adam. Cast into the Land of Nod, she found there the Grigori, who taught her their forbidden arts, and she was cared for by the owls, who love and serve her. When she found Cain, she took him in and taught him to survive, as well as the arts of witchcraft.

These are the leaders of 200 angels in 1 Enoch that are turned into fallen Angels because they took wives, mated with human women, and taught forbidden knowledge. Their children were a race of giants called the Nephilim.

Though less in power than the Patrons, these spirits are often worked with by Cunning witches.