The Curse of Qaz'zadim--first of the Teen Heroes series, takes place in Korhash (a medium sized city located in the southwest area of Gorgotha).

Long ago before the founding of Korhash, three brothers fought for the attention and approval of their stern and distant father--Hiren the Black, leader of the nomadic Sirashi Tribe. The eldest brother was a hot-tempered warrior of great skill, the middle a cold and calculating assassin, and the youngest was a free-spirited poet and magician--a Sha'ir.

After the death of their father, in-fighting and murder led to a split between the eldest and middle brother, which eventually spread to the whole of the Sirashi Tribe. The youngest brother would not choose between the other two, and advocated for peace: his actions were taken as weak and disloyal, and because of this, he was banished by both brothers with a single horse and limited gear. He wandered the endless sands of Gorgotha and survived for a time. Eventually fatigue consumed the life force of his horse and began to cloud his mind--making him lose his bearings and wander into the unknown. The endless wandering broke his kind spirit and just when he thought he would die, he stumbled onto a large oasis filled with fish and surrounded by large leaved trees, plump with sweet hanging fruit. Luck found him here and it was this place that he began to build his new home--his beloved city.

No one knows where the name Korhash comes from--the name's origins lost to time. Because of its value, Korhash has had many different rulers over its 700 hundred years of existence. 50 years ago, Shian-Kurah, an efreeti warlord of terrible power, conquered the city--rewarding those who aided him with wealth, and those who stood in his way with death and slavery. Shian-Kurah remains in power and upholds a decadent and violent society sustained on the backs of slaves. 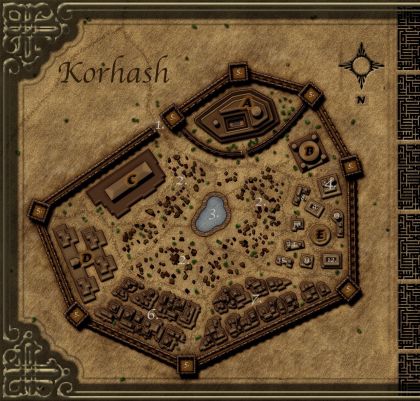