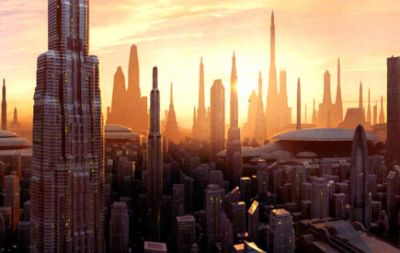 Though not the literal center of the Galaxy, Coruscant is its center in many other respects: political, cultural, economic and even astrogation (as it occupies the 0-0-0 galactic coordinates in that system).

Coruscant is an ecumnopolis - a single, globe-spanning city, with only a single range of mountains (the Manarai Mountains) in any kind of natural condition. Coruscant is one of the galaxy's oldest civilized world, predating any version of the Republic by tens of thousands of years. Coruscant's position relative to the major hyperspace lanes has always lent it an important position in galactic affairs, eventually becoming the capital of the Galactic Republic as it is known now.

As the planet developed, the needs of the economic powerhouse and galactic government brought with it a massive boost in population. The world was already covered by layers of urban cityscape, and it kepts growing. As the city stretched higher into the sky, the population stratified. The wealthy and powerful literally rose to the top, leaving the lower levels to the poor. Though the ecumenopolis has housed some of the most notorious criminals in its checkered past, Coruscant's underworld is primarily made up of crime figures with local or system-wide reach at most.

Skyscrapers reach kilometers into the air, while countless levels and sublevels delve deep into the planet's heart. A trillion sentients (by official estimates) call Coruscant home, and unofficial numbers may put the total far higher. Coruscant may well have been humanity's original homeworld, long ago in the mists of prehistory. Even now, humans make up the majority of the planet's population.

Though Coruscant still has some water frozen in its ice caps, it must import countless megatons of foodstuffs, millions of gallons of potable water, and vast amounts of raw materials to feed the world's voracious inhabitatnts.