The Dark Room is a room that exists outside of known space. It is a place with an interior, but no exterior, as far as anyone can determine. Once, it was the pitch-blade and gore-soaked lair of the demon Bune, shackled within by some kind of mystic restraints, and finally slain by the Maple Shade Cell.

The Mystery of the Antechamber

Opacity: 3 • In order to begin to scrutinize the Mystery, the viewer must be within the Antechamber (also called the Dark Room).
Surface Information: This is the result of any successful Revelation test done before the Mystery's Opacity has been unraveled completely.

Deep Information: This is the result of a successful Revelation test done after the Mystery's Opacity has been unraveled completely. 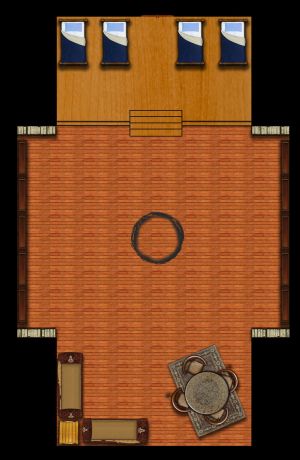 Now, it is a room with a red, always polished hardwood floor, walls covered in rich wallpaper in jeweled tones, and chandeliers that seem to hang in nothingness, as its ceiling is not visible in the darkness beyond them. It has furnishings that seem to be well-cared-for antiques from the turn of the century, which have been organized into a pattern useful to the cell. Unused pieces of furnishings (those shoved off to one side) tend to disappear overnight, though they occasionally make a re-appearance somewhere in the room, along with the occasional piece of new furniture.

The Dark Room has neither windows nor doors, and is marked by a circle of black smudge in the center of the room, which contains one sigil for each of the people who bear the Mark. The widest part of the room has tall bookcases that stand some twelve feet high, just shy of the height of the chandeliers.

The Stair Arch and the Winding Stair