One of the oldest colonies in the Halo Frontier, Gandria began as a mission-colony of the Sokrinti Hegemony, but a certain native species of hallucinogens found its way into the food supply. This led to a variety of ecstatic religious experiences that eventually caused the theology of Gandria to veer sharply away from the Hegemony's orthodoxy, causing the formation of what is referred to as the Sokrinti Disorthodoxy by Gandrians, or the Gandrian Heresy by mainline Sokrinti Hegemonists.

Though not everyone who lives in Gandria is an adherent of the Disorthodoxy, everyone with any kind of political power or wealth certain is. Gandria's native economy is strongly agricultural and medical, owing to the native plantlife of the tundra and the subarctic bogs of Gandria.

A heretical offshoot of the Hegemony, the Disorthodoxy owes its existence to native hallucinogens, which have today been filtered out of the food supply and deliberately concentrated to provide a sacramental experience for all adherents of the faith during high holy days (observed on different days by different Bishoprics).

Divided into Bishoprics, or sub-sects, that all hold different facets of the faith as important, but agree upon their collective theology. Gandrian theocratic citizens all belong to one or these Bishoprics, who provide civic bureaucratic and employment functions for their citizens. They are effectively organized like corporations, save that their focus is (ostensibly) theological rather than capitalistic. Non-adhering citizens still work for these various Bishoprics, but they are permitted to seek work among any of them. Because of the stigma for non-adherence, however, such jobs tend to be menial or dangerous. 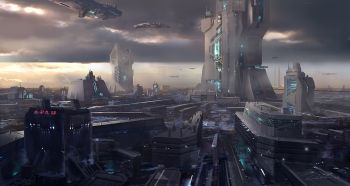 Named for the saint-figures in the Sokrinti faith, this is where the colonists from the Hegemony first landed and settled, beginning to build. Today, "the Rest" is a sprawling megapolis on the cold tundra south of Gandria's equator.
Notes