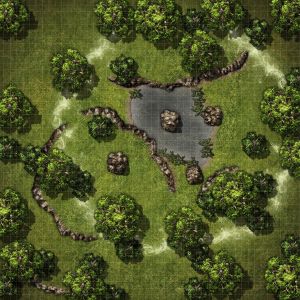 Though the terrain specifics of Harper Refuges vary based on the location, they all have a few potent magical gifts in common, blessings rendered by deities such as Silvanus, Mielikki, Eldath, and Selûne, as well as the elven deities Rillifane Rallathil and Solonar Thelandira.

All Harper refuges have a body of water.

For as long as a creature is within a Refuge, the following abilities apply:

Refuges are protected from a great deal of change or damage.

Each Refuge has a set of benefits that are invocable by anyone with an attuned Harper pin, or who receives spells from or is an ordained clergy of the deity or deities who empowered the Refuge (each Refuge was created by one or two of the deities who sponsored the Harpers, or their allies). Any druid is considered aligned with Silvanus or Chauntea.