The Assumbars have only grown in power and number since the days of old Waterdeep, before the Spellplague. They yet maintain a chapel to Siamorphe, and by and large lead the cultus to the Waterdhavian deity. A family whose wealth and reputation is centered in carpentry and wainwright concerns, there is no greater acknowledged carriage-makers than House Assumbar in Faerûn. The family is known for its strict adherence to bloodline lineage concerns and to their faith in the goddess of nobility.

The House of Chalices (Villa) 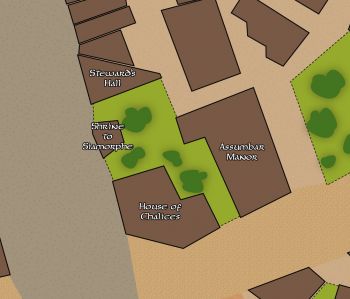 The wall around the House of Chalices is a five-foot tall wall of pale blue-grey stone, with its top foot wrought of white stone chiseled with the House's chalice sigil into it, and gilded beneath a layer of glass. At night, magical illumination emanates from one out of every three of these chalices, bathing the street around the manor in pale gold-white light. It is said that these lights detach from the wall and chase anyone foolish enough to try and scale the wall.

Scions and agents of House Assumbar in good standing might receive the following benefits: