Silmerhelve is one of the older noble houses; traditionally their trade and business interest include guardianship, warrior-training and pandering. WATE1-1 Kylynne Silmerhelve, newly appointed tiefling magister Dala Silmerhelve, the much protected only daughter of House Silmerhelve, wanted to see some excitement and do something a bit dangerous. WATE1-1

One of the older noble houses in Waterdeep, the Silmerhelve's history seems almost charmed in comparison to so many of their fellows. The Wailing Years seem to have affected them almost not at all, with their businesses booming. Of course, the fact that their essential identity is centered around the idea of protecting folk just means they had more than enough work to keep them secure and prosperous.

The Silmerhelves are well-known to have a ghostly guardian within their family. Lady Shaerista Silmerhelve – a sad old ancestress who was quite mad in life – occasionally appears to members of the family to advise them and correct their choices. She has also been known to warn the head of household about perfidy within the House's ranks, allowing the Silmerhelves to frequently cut out potential problems and scandals before they occur. As a result, the Silmerhelves have a lofty reputation among Waterdhavian nobility: they are widely regarded as "goody two-shoes" figures, but also very coveted as friends (because they also have a reputation of sticking with their friends through all problems).

The Silmerhelves also have an oddly positive reputation among streetfolk and soft-traders, for one good reason: they know that a Silmerhelve-backed pander will never beat their coinlasses or coinjacks, and will always protect them well. Silmerhelve-owned festhalls are always safe places for soft-traders to practice their vocations, and the folk love them for it. 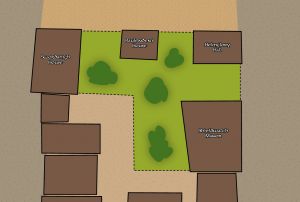 The wall surrounding Shieldwatch seems prepared for war: it is ten feet tall, and of an imposing thickness. It is also dotted with arrowslit openings every ten feet.

The Silmerhelves have made a fine business out of pandering: that is, the protection of soft-trade workers. On the lower end, this means individual panders and their crews of roughs who provide protection to soft-traders working the streets. On the higher end, this means investment in a variety of festhalls around Waterdeep. Silmerhelve coin comes with some requirements about upgrading the security of such locations, so while the festhall owners themselves may find the highcoin demands tedious, the actual workers are often thrilled to find the Silmerhelve crest suddenly displayed prominently beside the door and above the bar of the festhalls they work in.

The Silmerhelves also own and operate two festhalls in their entirety:

NW of Westbridge, on the edge of Kryptgarden Forest, Dessarin Valley
The principle country estate of House Silmerhelve, Helvenblade House is a fortified country manor, with stables, a guest lodge, and two outlying hunting lodges connected by grass paths which enclose gardens and a lawn. The estate includes a wooded hunting preserve for several miles into the Kryptgarden. Silmerhelves visit multiple times a year, staying for a week or two at a time; the rest of the time, the estate is simply lived in and maintained by the estate staff, overseen by the steward. Silmerhelves undergoing long convalescences or recovering from grievous injuries are sometimes transported here to take the country air.

Scions and agents of House Silmerhelve in good standing might receive the following benefits: