One of the Waterdhavian Houses native the area around Waterdeep, the Tespers are an old military family. Though, per the laws of the city, they do not maintain a force within its walls larger than a basic household guard, the Tesper lands in the Lower Dessarin Vale have not only a couple of small garrisons, but also a training grounds. They do not themselves field mercenaries; the Tespers make a good deal of their coin teaching mercenaries, however, as well as militias and civic defense forces around the North. The Tespers also sponsor one of the biggest fencing schools in Waterdeep, and are among those nobles pushing for the re-legalization of dueling laws once more it the City of Splendors. 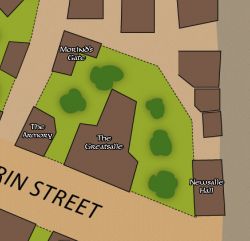 The wall around Tespergate is an imposing edifice some twelve feet in height, with sword blades stuck up through the top of the construction. One of the buildings – Newsalle Hall – stands outside the wall proper, on Mendever Street. The front edifice of the Greatsalle is where the villa gets its name from: a pair of massive twenty-foot-tall wood-and-iron gates, painted deep blue and set with gleaming brass heraldry plaques.

The Tespers also hold lands between the Dessarin River and the Westwood, in the Dessarin Vale northeast of Waterdeep. In particular, around the Maiden's Tomb Tor village.

Scions and agents of House Tesper in good standing might receive the following benefits: