The Wands are a populous, rollicking family. Once given only to magical pursuits, some intermarriage with the Thanns put the Wands on the path to landlordery and moneylending; the latter in particular has been quite successful for them, as they have a reputation for using magic to collect debts owed them. They own a variety of properties in Waterdeep's Trades and South Wards, as well as quite a bit of it among the Undercliff properties.

About half the total Wands family actually dwells outside of Waterdeep, scattered mostly throughout the North and along the Sword Coast. They tend to maintain fine estates with a reputation for wizardry, many of them taking in local apprentices and training them for fees or service. The Wands have eight such estates, located in Neverwinter, Yartar, Secomber, Mirabar, Amphail, Baldur's Gate, Scornubel, and Berdusk. Between them, they house just over forty of the House's membership, with occasional visits from all of them to Waterdeep. 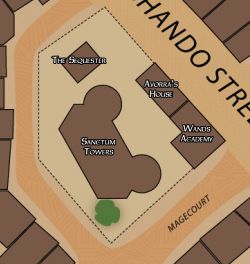 The impressive Wands villa is a testament to the family's magical legacy. Consisting of four buildings, one of which is a massive edifice that includes two soaring towers, the compound includes not just domiciles for the Wands family, but also the academy of wizardry they maintain. The compound is named for Eldrus, the nominal founder of House Wands. The wall around the compound is a distinctive stone, gleaming like obsidian, but blue-black in color, with its upper edges carved with a variety of sigils. Small magical sparks float upward from the upper level of the wall, and local thieves certainly know better than to try to get over the twelve-foot edifice.

Scions and agents of House Wands in good standing might receive the following benefits: