Jace Belos - Academy of the Stars

My life has been a maelstrom of dualities. I was a bit older than most when the Jedi came to take me to the Temple. I remembered more of my family than most other Younglings, but I did not miss my family as much as others would. I worked hard to prove myself to be the best and most skilled in my Clan, but I was also emotional and undisciplined.

Eventually, my skill and strength in the Force was overshadowed by this emotional failing. When I was sent to my Gathering on Ilum, the apparitions in the great caves showed me things that terrified me, loss - rejection - abandonment, and I became swept up in my fear. When I emerged, without a Crystal, the Masters could sense the conflict in me and found me unfit for further training.

For many this would have been the end. I was sent off to the Explore Corps and for the next several years, I did my best to leave the True Jedi behind me. Then, in a strange twist of fate, I was assigned to the Chu'unthor, and ended up involved with a group of Padawans.

These kids and their masters challenged my ability to keep my cool, and yet, I felt a strange sense of purpose and belonging. It was with them that I acquired a Holocron I believed to contain the Gatekeeper of Jedi Master Lord Durym Raegos. After many months of study and tutelage under the obscure master, I came to understand my place in the Force and slowly let go of my resentment. It was then, that Lord Durym reveled his true nature to me. He was not a Holocron Gatekeeper - but a Spirit of the Force, one who had awaited centuries for me - a fulfillment of an ancient prophecy.

When I reveled this to the Master of the Chu'unthor, they considered this a great moment in the Force and allowed me to become a Padawan.

Reduce the Encumbrance of worn garments by 3. 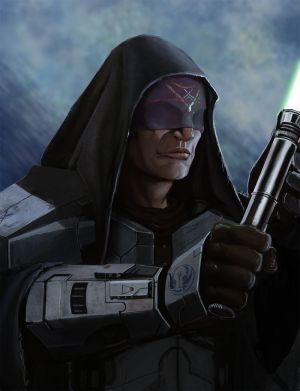