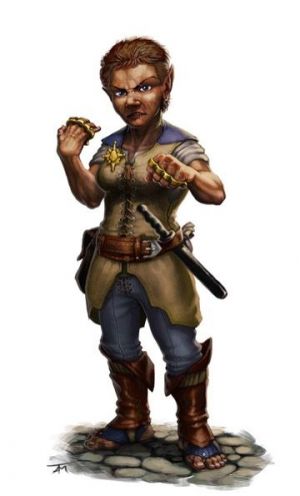 Lobelia was the third girl of five and fourth our of seven children, a middle middle child. Her parents were Goric and Qiara Hamson of the city of Beluir, nomads and traders. Her childhood was filled with stories of exotic peoples and distant lands that eventually led her to leave the family and strike out to make her own fortune. At least that's what she tells anyone who asks.

The truth is different. She will never reveal who her parents really are, nor how many siblings she really has. Anyone searching for the Hamson family will find they exist on paper but no one has ever actually met them. Not that it matters to her, she has been Lobelia longer than the young woman she was before. She has to be Lobelia, it is the price she paid for the foolish mistakes of her youth.

Like so many tales of youthful indiscretion, it revolves around loving the wrong person. In Lobelia's case it was the lure of the charming scoundrel, Carissa Quickfingers. Carissa led a small gang of young halflings, mostly women, who prowled the merchant district of Beluir. In the beginning it was exciting, stealing from non-hin, a coin purse, an exotic fruit, a fancy scarf. Carissa taught her many things, both professionally and personally. Using Ziran increased the thrills of capers and celebrations, and Lobelia quickly became addicted. That was when things started to get dangerous. Carissa had told her stories of an old human who ran an orphanage that he used to train pickpockets, and how horrible it was that those poor kids never got a chance to be kids. She convinced Lobelia that the kids would be better off if the old man just died. High and wanting to prove her love to Carissa, Lobelia took care of him for her. Carissa was so pleased that she had taken care of him that it made it easier to suppress the guilt Lobelia felt, and another dose of Ziran didn't hurt. And so it went. Carissa would urge her to take care of another "horrible person", always a non-halfling criminal or gang leader. Lobelia would rush to do her bidding and if she didn't, Carissa wouldn't let her have any Ziran until she agreed to do it. The "favors" started becoming more and more complicated, and she would have to spend longer and longer periods of time planning how she would carry the assassination out.

It was during these times that Lobelia met and befriended an older halfling woman, Auntie Bella, who sold herbal remedies is a small shop that served as her home as well. She would often invite Lobelia to have tea with her, which always seemed to take the edge off the headache that came after the drug ran its course and helped her plan better. She never pried into Lobelia's life and regaled her with tales of her younger days as a traveling merchant. It was an odd friendship but she was one of Lobelia's only friends outside of the gang.

One night, having completed her latest contract, she was carefully making her way home when she spotted a group of Zhentarim closing in on the hideout. She had only just grasped the handle of her knife when she felt the sting of a needle on her neck. As she felt the drug quickly spread through her body she heard Auntie Bella, "I'm sorry child, I can't save your friends but I will not let you die foolishly." and then the drug fully took hold and she fell unconscious. When she woke she was restrained to a soft bed, Auntie Bella was quietly humming in background, moving casually through the room. "Oh good! You're finally awake. Sorry about the restraints but the withdrawal from Ziran can be difficult and it's going to be a rough couple of weeks for you. But don't you worry, Lobelia, I'll be here to help you through it." Lobelia found her voice at last and started to say "My name isn't Lobelia, it's-" "Lobelia. You are Lobelia Hamson. That other girl died last night. The Zhent saw to that. If they think she might still be alive they'll go after her family and childhood friends until they find her. She is dead." Lobelia had never heard that tone from Bella before, steely and curt. There was a cold, hard look in her eyes as she said it. Just as quickly her smile and cheerful disposition returned, "When you are better we will discuss it more, for now rest." Bella's voice kind and gentle once again.

The next few weeks went by in a haze of fever dreams and withdrawal pains but finally Lobelia was free of her addiction. She learned from Bella that Carissa had been consolidating power by assassinating her rivals, or rather having Lobelia assassinate them. Carissa had become a fairly major up and coming player in the underworld of Beluir until she make a fatal mistake. She had sent Lobelia to assassinate a couple of Zhentarim agents, and the Zhent had retaliated in force. No one from Carissa's old gang had survived, Auntie Bella had gone in after the Zhentarim had left and confirmed that Carissa had died with her gang, and as luck would have it Carissa had taken a new lover while Lobelia was planning her last mission, and the Zhentarim had mistaken the woman for Lobelia. When the Warders had eventually come to investigate she had told them it was Lobelia with Carissa.

One afternoon Bella came into Lobelia's room, her cheerful demeanor somewhat subdued, "We need to talk about your future now, Lobelia." She then told Lobelia that she was actually a Harper, more of a Watcher these days than an active agent. She told Lobelia that she was sending her to Waterdeep, no one in Lurien could know she was still alive. Bella had arranged for her to speak with an old friend, Vescaras. While the Harpers often were painted with heroic tales, on occasion they had to resort to methods like assassination which Lobelia had shown she was quite skilled at. The difference would be that she would never be forced to kill someone she didn't believe deserved it. In the end Lobelia agreed it would be for the best and a few days later she was on her way to Waterdeep.

The trip to Waterdeep was uneventful. Every moment alone she poured over the papers Bella had given her, memorizing her new life, slowly transforming into Lobelia Hamson.

When she finally arrived in Waterdeep and met with Vescaras she was paired up with another Harper agent. Vescaras wanted her to learn spycraft between any contracts they might have for her. For the next 20 years Lobelia refined her art both as an assassin and a spy. True to her word, the Harpers never forced her to take an assassination contract, and they gave her all the information they had on a target so she could make her own decision. In all cases bringing her, or another assassin, was a last resort when all other methods had been exhausted.

About ten years ago she was approached for a long term deep cover assignment, infiltrate Darkhold. It was a simple assignment really, just keep her head low, listen for important going ons, and report anything actionable to her handler in the village below Darkhold. Her cover was believable as well, a stealthy specialist who on occasion took assassination contracts between jobs. Over the course of 10 years she slowly worked her way up from a lowly lacky to the head of a group of 5 thugs. No one important really, but not someone assigned latrine duty every day. She had even discovered an artifact in the Zhentarims possession that the Harpers wanted her to eventually retrieve, the Scepter of Tyranny. Her and her handler were still making plans on the best way to steal the artifact and extract her when some other enterprising thief swooped in and stole it. The consequences of this were Lobelia no longer knew the whereabouts of the Scepter and worse of all, her cover was blown. In response to the theft, the Pereghost sealed Darkhold and began scruitinizing everyone in the keep and she had to flee or be found out to be a Harper agent, effectively burning her cover.

After a harrowing journey back west she was ordered to lay low in Minstrel's Rest until things with the Zhentarim had cooled off, and their seeker agents in Waterdeep had left the city. This is where she met up with Denabria's Cell and her next assignment started.