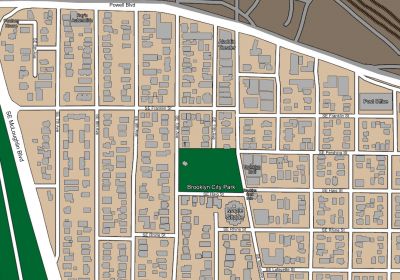 The Brooklyn neighborhood is a largely residential area, squeezed between Powell Blvd to its north, the river to its west, and a bevy of train tracks where cargo trains load and unload day and night to its east (though there's a little overflow of the neighborhood just beyond that).

By and large, the houses here are old pre-WWII construction, run down and rough, as nobody who lives here has the money to do things like upkeep. Portland has just started focusing on renewing this neighborhood, though, and a number of new buildings and refurbishment projects have gone up on both sides of SE Milwaukie Ave, creating a strip of retail spots that are both places for locals to spend money and places to find employment.

It's a neighborhood of run-down houses and weed-choked yards, full of drunks, addicts, and the very poor.