Near the docks in Waterdeep, at the southern edge of the Castle Ward where it meets the Docks Ward, there sits the Yawning Portal. Once the site of the long-vanished tower of Halaster Blackcloak, the Yawning Portal's singular feature is the massive, forty-foot across well that descends some one hundred and forty feet into the first level of Undermountain.

Other than this, the Yawning Portal is a dingy wooden tavern/inn frequented by adventurers and those who're interested in such. The rooms are usually let to adventurers, and similar folk. 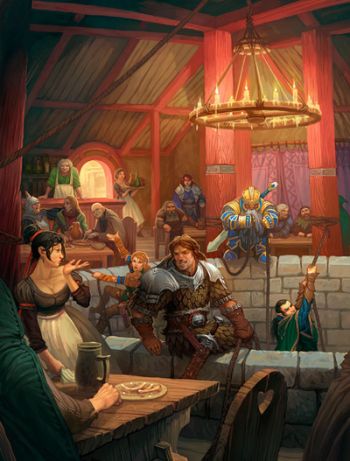 It costs 1gp to head down the well, and another to get hauled back up (which folk can signal for with the bell-rope that hangs down the side of the bell). Block and tackle is used to lower and raise folk - this doing is invariably cause for great commotion in the tavern, as the locals cheer on those who're descending with wagers to their neighbors and by a rousing tavern-wide rendition of "Down the Well", a bit of pub song that the locals love. Torches line the top of the well, providing light for the first fifty feet or so down the well before a plunge into the darkness of Undermountain. The faint light can be seen at the top of the well from the room at the bottom of it.

While a lowering into the depths is cause for celebration, there is a heart-stopping moment when the bell rings from below, signaling that someone - or something - wishes to be let up. Because there's no way of knowing exactly who or what is down there, everyone waits with bated breath, peering over the edge to see exactly what rises up out of the darkness. It's almost never a monster of some sort, of course, and even when it is, Durnan simply kicks the stops off the block-and-tackle to let it plunge back into the depths. More than one monster has scrambled up the rope faster than anticipated before, however, or particularly capable creatures might come crawling up the sides of the well. And everyone still talks about the time the beholder come floating up out of the well!

It's easy to pick up all manner of lore from the folk about Undermountain here. The trouble is figuring out which of it is correct, was once correct but has changed and which of it is plain false. Despite having a long history of hosting adventuring companies delving down into the depths, there are no complete maps to the place, for a couple of reasons. The first is that most adventurers don't want the competition; the second is the folklore that warns of the nasty endings that people who do try to sell relatively complete maps of the place come to. It is generally agreed that there are forces in Undermountain that don't want their secrets told.

That said, it is occasionally possible to purchase partial maps - a scrap that someone recovers from a moldering corpse while down the well, or a bit that one group that has no intention of "ever going back down into that place again" are willing to sell. These scraps can be had for as cheap as a gold piece, all the way to as much as a hundred gold pieces, depending on the completeness of the map.

The one map that Durnan has posted, however, is the map of Undermountain Levels. This can be found here and there tacked up to the wall and on tables, and it's not uncommon to find partial maps are sold sketched onto the back of these sheets.