Zashto Tis was born on Shili, but didn't spend very much time there. When he was still very young, the village he was born in was attacked by Zygerrian slavers while the hunters were away, those left behind were either killed or taken as slaves. Zashto was among the children taken that day. Over the next couple years Zashto witnessed his clan mates die from exhaustion, or at the hands of slavers, sometimes in the fighting pits. Some would be taken away, never to return to the compound. He saw hope dwindle in the other's eyes with every passing day. Then they came for him, he was almost 6, he had been sold. He was taken to Abregado-rae to work in the warehouse of a smuggler. That's when his life took a change for the better, his purchase had been the final piece in an investigation of the smuggler by Master Vadoo Puhr, a Sakiyan Sentinel. During the raid Master Vadoo sensed Zashto's potential brought him back to the temple at Coruscant where the council decided that Master Vadoo should be his teacher. Zashto needed a master that understood the suffering he had endured and could teach him the difference between vengeance and justice.

Under Master Vadoo's tutelage, Zashto learned to wield a lightsaber in defense of others and to wield the force to aid him in this cause. He also learned that obeying the rules and doing the right thing are not always the same thing. That sometimes, for the greater good, you have to break rules. Zashto would frequently accompany Master Vadoo on his investigations, especially the civilian ones. Very rarely he was allowed to help hunt down rogue Jedi. Eventually Zashto passed his Knight trials and was given tasks of his own to complete, often getting the results the council wanted but by skeptical means. Never crossing the line, but sometimes causing many raised eyebrows.

One of his last assignments before Adaloosta-Rae was the tracking of a new rogue Jedi, the council was stretched thin with other concerns and Zashto was the only one available with the skills and experience and it needed to be handled quickly and quietly. The information they gave him seemed incomplete, but it was enough to work with, so over the next few days Zashto hunted and tracked. He finally caught up to the rogue on Abregado-rae in the very same warehouse he had been rescued from, the rogue Jedi had begun to build a smuggling ring. Quickly neutralizing all of the guards and henchmen Zashto worked his way into the warehouse and found a figure that seemed to be cloaked in shadows. No matter how he tried, Zashto could not pierce the illusion this fallen Jedi was creating. Zashto ordered the figure to surrender, but it's distorted voice mocked him and attacked. It was one of the toughest fights Zashto had ever been in, his opponent was a master of the same techniques, and strong in the force able to maintain the illusion during the fight. Blade strikes would come from nowhere. As the fight wore on he could tell his opponent was beginning to tire from maintaining so many powers, so Zashto pressed the attack finally able to disarm the shadowy Jedi. Again Zashto asked for his surrender. The fallen Jedi barked out a malicious laugh and out of the corner of his eye Zashto saw movement. He saw a caged Togruta child that he had somehow missed before and his blood ran cold. In the moment of his distraction the rogue had snatched up his lightsaber and was running towards the child, saber swinging down to strike. In that moment time seemed to stop and Zashto felt his anger, fear and frustration slip away, to be replaced by sorrow and compassion. He had recognized the child and in doing so the illusions were stripped away and he knew what he had to do. He drew on the force and leapt between the Jedi and the now empty cage and struck Vadoo Puhr down. As he fell, Vadoo's face relaxed, no longer obscured. With his last breath he said "I'm glad you were the one to find me." and then died.

Zashto had Vadoo's body and possessions returned to Coruscant and filed a report, but did not return to the temple himself. The calm he had achieved before striking down his master had left, filling him with rage and anger. He traveled to a neighboring world were the Jedi were trying to peacefully remove a dictator from power. He infiltrated the people, stirring up resistance, teaching them to fight. Always slipping away before he could be singled out to lead. Within a few months he had created a rebellion amongst the working class, and spurred them on to overthrow the dictator's rule. Only then did he return to the Temple.

Rumors flew that it was the Jedi who caused the rebellion, even as they were trying for a peaceful solution, the Jedi Order was under scrutiny. Unable to confirm that it was Zashto that caused the rebellion, he would not reveal where he had been and had covered his tracks, the Council decided they needed to get him out of the core worlds. He was told he would be the Temple Guardian for a newly rediscovered temple, and if the temple turned out to be viable he was to be it's protector until the Order sent a replacement. That evening he was on a cruiser to Adaloosta-Rae.

Injustice - Oppression
Zashto fights for the underdog as long as their plight is unjust. Whenever he travels to a region where the ruling entity is oppressing a faction of the society, he will do what it takes to end that oppression. This could be as simple as bringing to light an oppressed group exists, up to inciting a coup against the oppressive government.

Blood-orange with an orange aura. 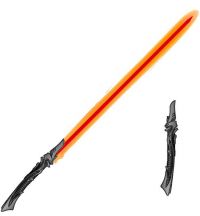