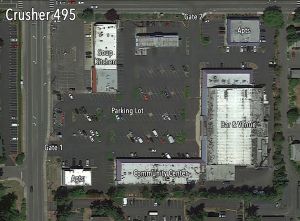 Crusher 495 has been around for more than thirty years in Redmond. Over those years it has been a restaurant, a nightclub, and a bar - but it has always been a place with no room for biases of any sort. It has always employed a large number of metahumans, particularly orks and trolls, and that has made it a target of various metaracists over the decades. It has been burned to the ground more than once, mobbed by racist groups many times, and been the target of more drive-bys than anyone can remember.

Today, Crusher 495 has expanded to cover most of the old buildings in this large parking lot. It is more than a venue for hard-thrash rock music and decent drinks. It also serves Kingsgate and the rest of Redmond as a sort of community center. Many of its buildings are set up to aid those who don't have anything, and its parking lot is the first stop for work trucks from out of the district every morning (a service those companies pay for, the entirety of which Crusher's management uses to fund other community-service initiatives).

There is no doubt in anyone's mind that Eddy Kosky and the rest of the Crusher's management are out to do something big: to turn around the Barrens, and to make peoples' lives livable while they do so. They are widely regarded as philanthropists, and even the harshest of the Barren's residents regard them with respect.