Reading is an act of civilization; it's one of the greatest acts of civilization because it takes the free raw material of the mind and builds castles of possibilities. - Ben Okri
Age: 65

Staff, rare (requires attunement by a wizard or sorcerer)
This staff can be weilded as a magical quarterstaff that grants a +2 bonus to attack and damage rolls made with it. While holding it, you have a +2 bonus to spell attack rolls.

The staff has 10 charges for the following properties. It regains 1d6+4 expended charges daily at dawn. If you expend the last charge, roll a d20. On a 1, the staff loses its properties and becomes a nonmagical quarterstaff.

Spells. You can use an action to expend 1 or more of the staff's charges to cast one of the following spells from it, using your spell save DC: mage armor (1 charge), magic missile (1 or more charges), protection from evil and good (1 charge). 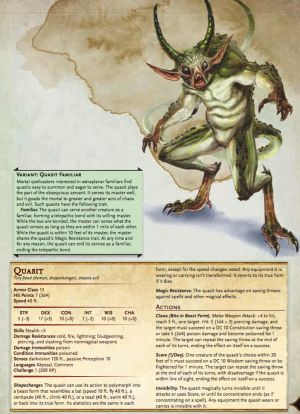