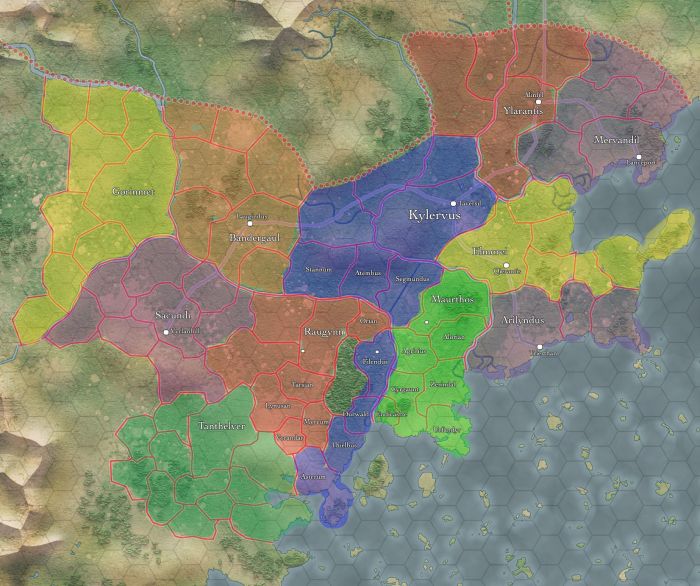 Warden of Three-Rivers • Status 7 • Oak (Crowned), Amber, and Tower.
Lord Artoran Kylervus is the warden of this realm, and the lord of this House. House Kylervus has extensive mercantile investments, and a close personal alliance with several Habersi trading cohorts. Their domain extends between two of the three rivers of the realm, and their seat, the city Taversil, is arguably the largest trading hub in the Crowndom, possibly including Crownhold itself.

Status 6 • Shark (Coronet), Coin, & Wharf
Masters of the port city Trierthan, House Arilyndus are well-known as pirate hunters. Though they do not have quite the same relationship with the Habersi as the Mervandil do, Arilyndus have the respect of the Habersi for their sailing acumen and skills at battle on the waves. House Arilyndus also maintains the most extensive shipyards in Ilbarych.

Status 6 • Mountain (Coronet), Pick-Axe, & Vault
Combative and fractious, the Bandergauls seem to have always acted as rivals and opponents to the Wardens, both the Ylarantis originally and the Kylervus after them. They are wealthy and old, their hills rich in silver, iron, and stone, and the family quite conscious of their pride.

Status 6 • Eclipse (Coronet), Book, & Altar
Known as some of most pious of the Great Houses, the lands of the Elmorei and their vassals have always been open to the cloisters of the unctæ and those dedicated to them. Though they have a reputation as folk who put on transcendent airs, their patronage of many covenants and cloisters certainly suggests they are at least mostly genuine in their piety.

Status 6 • Thundercloud (Coronet), Hammer, & Gallows
Lords of the eastern frontier in Three-Rivers, the Gorinmets have a long-standing hatred of the hill-dwelling wrightfolk who still inhabit the lands as yet unclaimed by the lords of Ilbarych. The Gorinmets maintain a brutal policy of awarding bounties on the ears of hill-folk – and more than one observer has noted that there is nothing to separate the folk of the hills from wrightfolk citizens of the Crown in those ears, making these territories a dangerous place for wrightfolk of any political affiliation.

Status 6 • Ox (Coronet), Jewel, & Gate
Originally a vassal of the Elmorei, the Maurthos accepted the vassalage of some of the old Zarovet vassals and broke away from their old affiliation with the blessings of the Elmorei, to whom the Maruthos are still very close allies. House Maruthos maintains very close relations with the Guilds – no surprise, considering that the guild-town Canbervale is found in their domain.

Status 6 • Phoenix (Coronet), Lily, & Ship
Known for their long-standing relationship with the Habersi traders, House Mervandil are deeply invested in trade routes themselves. In a very real way, the Habersi bring goods to Lanceport, the seaside market city of the Mervandil, and the Mervandils get them to the rest of the Crowndom. The Mervandil have married several Habersi into their lineage over the years, and many of its scions are trained in the thin blades of Habersi wave-dancers.

Status 6 • Three Stars (Coronet), Jewel, & Road
In the wake of the Ylarantis fall from grace, it was nearly House Raugynn and not House Kylervus who were made Wardens of Three-Rivers. It is generally agreed that only a significant flurry of back-room deals and alliances brought the Raugynn to the side of the Kylervus at the eleventh hour, and in the generations since, it's been clear that the Raugynn scions may regret the concession of their ancestors. Still, the Raugynn are no Bandergauls – they are renowned for their honor and faithfulness, although they have made it clear that their liege needs to be at least as upright as they. In the past, every time they have gone against House Kylervus, it is because of underhanded or shady decisions by the Kylervus that the Raugynn have very clearly noted as being beneath their dignity. The Raugynn town of Tarnthis is regarded as home to some of the finest jewelers in Three-Rivers.

Status 6 • Horse (Coronet), Iron Ingot, & Forge
Before the Gorinmets and Tanthelvers were raised and given warrants to expand the borders of the Crowndom, the Sacundi were the newest of the Three-Rivers houses. Though now they have a degree of pedigree above the two upstarts, they also watch with no small degree of envy as the frontiers of the Three-Rivers continue to be pushed to their north and south, and they are starting to feel they have been left out of the benefits of similar expansion westward. Still, there is no one who could question the wealth and power of House Sacundi – the city of Vrylanhill sits beneath some of the richest iron ore-bearing hills in the Three-Rivers, with numerous mines and smelters that funnel that wealth to the rest of the Crowndom down the Crownsroad.

Status 6 • Wolf (Coronet), Elm, & Tower
The southernmost of the frontier domains, House Tanthelver and their vassals harvest what remains of the great woodlands of the Three-Rivers areas, providing extensive lumber resources to the rest of the realm. The scions of House Tanthelver have a reputation as hunting, wild-ranging woodsmen more comfortable in forest glades than in civilized courts. Still, they cut romantic figures during the Summer Courts, that's for certain.

Status 6 • Badger (Coronet), Shield, & Road
The first Wardens of Three-Rivers were House Ylarantis, appointed by Crown Manea Ceolfrey. Unfortunately, the rich lands were a terrible temptation to a great many, leading to numerous charges of corruption by House Ylarantis, taking the sides of Houses who gifted them the most richly. By the time of Crown Serydia Ceolfrey, their grasping ways threatened to embroil Three-Rivers in a storm of small inter-House conflicts. To ensure peace, the Crown stripped House Ylarantis of Wardenship and granted it instead to House Kylervus, a slight which the Ylarantis have never forgotten.