In many ways, the Wailing Years were transformative for House Thongolir. Originally a house of printers, calligraphers, and writers, with the chaos that came with the destruction of the Weave and the subsequent Spellplague years, much was lost in Waterdeep. The Thongolirs were on hand to lend their wealth and influence to the stability of the city. Many of the Thongolirs stepped up into civic positions within the city, bringing with them the weight of history from their archives, and exerting their position to help keep order.

Today, the Thongolirs have a reputation not just as writers but also as magistrates. More Thongolirs have served as black robes than any other House, even though noble magistrates frequently find themselves under increased scrutiny from their fellows; it has become a family tradition that all Thongolir magistrates automatically recuse themselves from any cases the involve the nobility in any capacity, to address exactly this issue.

This investment in Waterdeep's laws has shifted the House's religious tendencies, as well. While the Divine Scrivener Deneir remains important to Thongolir belief, a great deal of worship is also rendered to Amaunator, the Light of Law. The Thongolirs are currently involved in fund-raising efforts to see a temple built to that deity. They are also involved in the funding of the Monastery of the Sun, whose divine patrons includes Amaunator.

This devotion has also led to an avid investment by the family in Field Ward properties after the razing of the ward by dragon fire recently. Seeing the lawlessness that threatened to emerge from the ward, they now seek to help make it into a proper city ward, rather than a lawless slum. So far, however, those efforts are stymied. 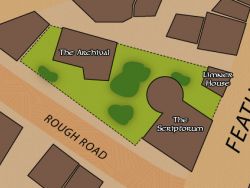 The Thongolir Sea Ward villa is surrounded by more fence than wall: it is a low grey stone foundation of about two feet in height, with carved, eternally looping scrolls unfurling around its length. From there, a wrought iron fence rises, closely set enough that most folk have to stop to peer inside in order to see the grounds. The very top of the fencing is shaped to resemble pen-nibs, gilded with blueshine silver to make them stand out.

Quests undertaken by agents of House Thongolir might include the following:

Scions and agents of House Thongolir in good standing might receive the following benefits: