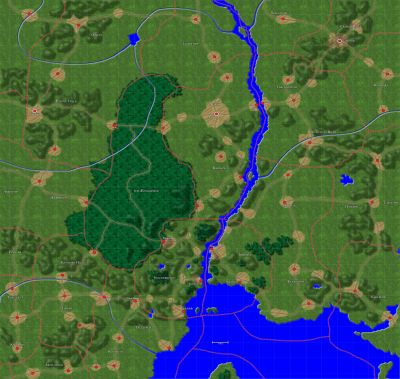 A dense woodland of old growth, the Æfingwood hearkens back to the ancient woodlands that extended over all of what is now the Crowndom. Commonfolk – particularly wrightfolk – have something of a superstitious dread of the place. The noble Houses whose domains border the woodland have a license from the Warden to hunt in its green shadows; in exchange, they are expected to help curtail banditry and dangerous beasts within its bounds.

Town
Tarnthis is a little further away than Avissa, though it is under the dominion of House Raugynn, who are neutral/friendly to the Durwalds. It also has several guilds of smiths, including jewelers who work the goods mined from the hills surrounding Tarnthis. It is also the location of the closest wrightfolk forgehold.

Domain: Plains; Large Town, River (Lands 28) • Holdings: Rich Mine + Smelter
The wide open plains of Avissa are dotted with a number of old wrightfolk barrows, and the mines that inevitably go with them. Combined with the silver mines in the roots of the hills in the southern portion of the domain, Avissa is a treasure chest to the House that controls it. Its wealth has certainly been put to good use by House Filendus.

Domain: Hills; River (Lands 10) • Holdings: Food Agriculture (Grapes) + Alcohol Distillery (Vintner), Gambling Den + Bloodsports
Hilly, with the sandy soil that makes it perfect for the cultivation of grapes, Karmandy is the beginning of Three-Rivers "wine domains." The wineries of Karmandy compete with the best the Three-Rivers has to offer, favoring tartly sweet dark grapes over lighter varieties. In the hills of Karmandy lies the Fighting Pit, a favored diversion of Sir Kriglun Ameth. Bloodsports are the order of the day, and the twice-monthly events draw both competitors and gamblers from all around the Three-Rivers, including some of its nobility.

The furthest away is Canbervale. It is the largest of the local towns, verging on being a small city. Though it is protected (and taxed) by House Maurthos, Canbervale is run by the Canber Table, a council of guildsmasters. It is the southernmost stop-off point for a great many of the major mercantile caravans, and positively dominated by a large trading market, the center of which is a massive indoor bazaar. Canbervale has numerous inns, taverns, and brothels, and some area nobles also maintain townhouses here. It has a massive tourney ground just outside its walls which have hosted large tourneys and festivals in the past.

Domain of House Durwald
Domain: Hills; Coast, River (Lands 13) • Holdings: Food Agriculture (Grapes) + Distillery (Vintners), Seasonal Festivals, Military Academy. At the mouth of the Peakesriver, where it flows into the Bay of Lances, House Durwald has been given a modest parcel of land as their domain. Although it is smaller than the portion allotted to House Filendus, it is arguably richer land, prime vineyard country and a river mouth that could conceivably serve as a trading port at some point in the future. For the moment, however, these lands – green with the many vineyards of the domain – are home to a few small hamlets, the largest of which, Hounds Peak, is home to both Durwald Hall and Gatewatch Academy.

Domain of House Segmundus
Domain: Wetlands; Grassland, River (Lands 7) • Holdings: Food Agriculture (Wheat), Granaries. The southern portion of the Segmundus domain, the low-lying wetlands of Walantar have been turned into extensive wheat fields, providing a significant portion of food for the domain and the rest of the southern Three-Rivers. The hamlet of Walantar is home to Bear Hall, the seat of House Segmundus.