"Civilization begins with order, grows with liberty and dies with chaos." - Will Durant

Ahmadar Catcatcher is an established thief taker frequently commissioned by various merchants and the City Watch. He is often found in the Castle Ward, most commonly at Blackstaff Tower, The Yawning Portal or at the Crawling Spider tavern.

Ahmadar is the son of Teshura, a fancy lady who used to be employed at the Crawling Spider tavern in the Castle Ward of Waterdeep. His mother is the daughter of Beldas, once a minor noble of Clan Darkfell, who had been exiled after his father Uldred Darkfell had been executed for treason and conspiracy against the King of Citadel Adbar. While not a legacy to be proud of, it far outshines that of who his father is, infamous agent of both the Eye and the Iron Ring in Skullport, Ahmaergo the Horned Dwarf. His mother had worked the grounds of Gyudd's Distillery before Ahmadar was born and claims with absolute certainty that Ahmaergo was his father. She left Skullport for Waterdeep and began working at the Crawling Spider shortly after his birth. Ahmadar, having no use for either side of his shady family history or their possible legacy, had disowned anything beyond his mother. A great many things have shifted about and changed in the past year. Teshura lives in Silverymoon now and she and Ahmadar have been recognized as scions of Clan Darkfell in Citadel Adbar, where he has spent many months studying old lore and bringing it to light to the dwarven scholars who had commissioned his visit and research.

Ahmadar had no idea he had a gift for magic. It's generally unheard of and an unsavory and suspicious trait when found amongst dwarves. The Blackstaff discovered him because of a mishap following a successful job where he had apprehended Demisante, a young half-elf girl who had been using magic to burglarize homes in the Castle Ward. Ahmadar would never have guessed back then that he would be forced to pursue and capture her again and that they would later become friends after he pushed for her to be released into the custody Khelben as an apprentice.

As part of his reward for turning the thief in, he had been allowed to keep her possessions. Among them was a very strange book. Ahmadar was fascinated by the inscriptions, designs and symbols in the book. He had started using some of these symbols as doodles and decorations and on one occasion when he was tracing one of the symbols from the book, the page flared with a blue-white light and filled his arm with such a terrible chill that it left his hand stiff and numb. Fearing that he had released some sort of terrible curse from the book, he took it and ran to the House of Wonder in search of guidance and healing. Once he had explained the circumstances to a priest, and then another, and then to about six others, all of them puzzling over his tale and the book he had brought them, they finally healed his hand and sat him in a little conference room with a cup of warm tea. He sipped his tea, confused by their keen interest in him until the Blackstaff showed up in the doorway. The Archmage stared at the tiny, tiny dwarf...so tiny. The towering wizard entered the room, closed the door and sat across from poor, doomed Ahmadar. It was as if that icy numbness from the cursed book had returned, but instead of just his hand, it filled him from head to toe and all he could think about was what in the realms had he gotten himself into? Oh. Oh a great deal in fact.

Ahmadar is 5' tall and 220 pounds of stocky dwarf. He has brown hair with a hint of ginger, which he maintains as a short, neat mohawk and a moderate length of beard with no ornamentation. Following his time at Citadel Adbar, Ahmadar has taken to wearing half-plate on his travels, covered with a red tabard with a stylized unicorn that Demisante had made for him to replace his old red robes. Her carries a shield with the Darkfell heraldry upon it and a blackened wood and iron wand covered with arcane engravings.

Those born under the sign of the Butterfly are restless, sociable and good natured. Cheerful, expansive and magnetic, they win friends easily and dislike offending others. Although often indecisive, they are not weak willed and tackle difficult tasks with infectious optimism.

Those born with Selûne under the sign of the Trident are quick witted, spontaneous and gregarious. They have a lively curiosity and are intelligent, persuasive speakers, enthusiastic, inquisitive and communicative. They love discussing new ideas and projects. 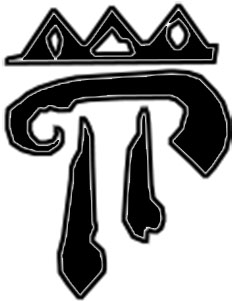 The Spellbook of Demisante the Dauntless

This small spellbook is a collection of scraps and whole pages bound with leather twine between two small wooden boards. The front and back covers are crudely engraved with elven symbols and a crude forest scene with a stick figure and what is likely supposed to be a unicorn. The interior is a mess of runes and symbols with every bit of available space around them crammed with tiny written notes and instructions in Espruar. Ahmadar has added new pages to the back of the book that contain his own neat and organized notes.
The spellbook had initially been a trophy when he had captured Demisante. She had escaped prison and created herself a new spellbook. When she was captured again, Ahmadar pushed for her release into the care of and apprenticeship to Khelben. She retained her new spellbook and Ahmadar accepted her grand gesture of the gift of her first spellbook to him for his kindness (keeping him mouth shut that he had no intention of giving it back anyway). Ahmadar's other collected tomes and spellbooks have rather impressive names, so he started calling this one The Spellbook of Demisante the Dauntless because it makes her happy to hear. 98 of 100 pages are full.

A simple leather bound book with "Ahmadar of Clan Darkfell" embossed on the bottom-right corner of the cover. There may be a circular stain on the cover from a foamy beer stein having been set on it in the past. 28 of 100 pages are full.

A simple leather bound book with "Ahmadar of Clan Darkfell" embossed on the bottom-right corner of the cover. 34 of 100 pages are full.