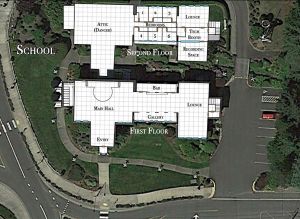 The venue called "School" used to be the Hollywood Schoolhouse, an old 19th century schoolhouse that has seen life as a school house, a community center, and eventually a rental hall for weddings and the like.

The edges of the School property are bounded by sunken-in plascrete pilings, providing barriers for cars and other larger vehicles trying to ram the building proper (though motorcycles are still capable of getting through). It has a fair-sized parking log on its eastern side, and the northern face, behind the club proper, has a large plot of what used to be a carefully sculpted garden, which has grown into a riotous tangle of weeds, thornvines and toxic-ground growth. There used to be a large back deck, but it has long since rotted away, with only bits of rotting wood sticking up out of the ground and protruding off the back of the house remain of it. The back door that once led to the deck has been locked.